There’s been a recipe — or rather, several related recipes — going around for the past month or so. I got the pointer from Diane Duane (Tumblr here) and the original recipe is at Azriona’s LJ where she has been posting a Sherlock Holmes fanfic to which it is related. I’m not really a fan of fanfic (or even profic pastiches) but I am a fan of chocolate, so I had to try it. I learned a bit along the way.

Azriona’s recipe leaves a few important details out; most notably, she doesn’t specify the size (or volume) of the pie plate or give a specific graham-cracker crust recipe. I checked a bunch of cookbooks and settled on the very simple crust in Christopher Kimball’s Yellow Farmhouse Cookbook. It just called for graham crackers, brown sugar, and melted butter, which suited my preferences. Of course, I had to buy graham crackers, and I knew I needed chocolate, milk, and eggs as well, so I went to the local Whole Foods (because I know they have good chocolate).

It was at the supermarket that I hit the first snag. Graham crackers were pretty easy to find, and I bought the same eggs as I always do, but the only milk they sold by the pint (the amount needed for this recipe) was Dean Foods. My only choices in non-evil dairies were limited to quart size packages, which meant the I would be using low-fat milk (so I could drink the rest). Hopefully that would be OK, although some recipes really could use the extra 2% milkfat from whole milk and I would have bought that if I could have gotten a pint from someone other than Dean Foods. I also picked up some chocolate feves from the specialty department — specifically, Valrhona Manjari 64%. (They also had Guanaja 70%, which they don’t usually, and Jivara Lactee 40%, which is too weak for me.)

When I got home and opened the box of graham crackers, I found that they were an odd size, slightly smaller than I expected. (It turns out that I was wrong.) I added an extra sheet of cracker to the crumb crust recipe, which still turned out OK so far as I could tell. I still didn’t know what to bake it in. For lack of a better idea, I first tried a 9-inch tart pan, but when I dumped the crust into the pan, it nearly filled the whole thing, and I was worried that there would not be enough room for the filling even after compacting the crust. So instead I used my Pyrex-brand-but-not-borosilicate-any-more-boo! 9-1/2″ pie plate, which turned out to be the wrong thing in nearly every respect. (As it almost always is. All pie recipes in the U.S. are written for either 8″ or 9″ pie plates, never 9-1/2″, and I have no idea why the people who sell stuff under the Pyrex brand name now seem to think that everyone wants oversized pie plates. I have two of the things and nothing ever comes out right. Must get some proper-sized ones some day.)

The filling comes together surprisingly quickly, as DD notes in her adapted recipe. I had to make one other accommodation, besides using low-fat milk: I don’t drink coffee, don’t ever have any in the house, and quite frankly despise the taste of it. So I just used water where the recipe calls for coffee; in retrospect perhaps I should have made a cocoa slurry.

Blog posts about food are always supposed to include photos, so here’s what the finished pie looks like. You’ll note that I followed DD’s advice and sifted cocoa powder across the top to keep that nasty film from forming (I happened to have some Valrhona cocoa in the cupboard so I used that).

A few defects are fairly obvious from the start. Since I didn’t know how deep the pie was going to be, I made the sides of the crumb crust much too tall. The filling set up so fast that I was unable to smooth it off properly. (Offset spatula dipped in hot water? Maybe next time.) And you’re supposed to use a white tablecloth or a black velvet mat and direct overhead light when taking pictures of food. (So sue me.)

I took some pictures from other angles, but I forgot to put the camera in aperture-priority mode so I could adjust the depth of field, with some comical results:

This was taken with a portrait lens, the widest-aperture lens of any in my camera bag, and it shows — the depth of field is paper-thin, leaving the central defect quite clear and the crust blurry.

I didn’t sift any confectioner’s sugar over the top as DD did in her second recipe, mostly because I’m only one person and I’m not about to eat a whole pie in one sitting. (Well, I probably could, but I’m seeing my doctor later this week and he would raise an eyebrow.) Here’s what it looks like with one slice (somewhat clumsily) removed: 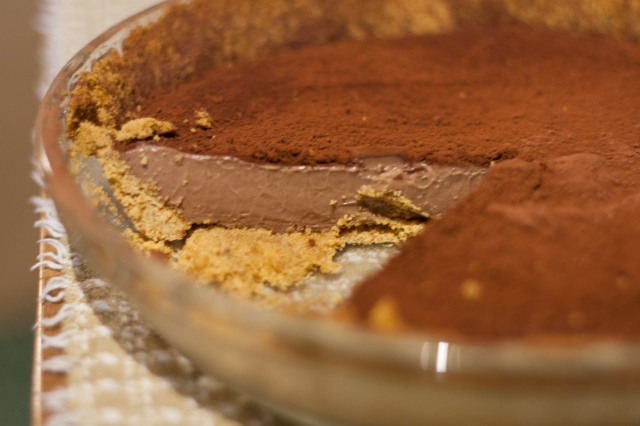 You can see that I didn’t do a very good job of evening out the crumb crust. Finally, here’s a single serving:

A slice of chocolate pie, Mk. I

So how was it?

I’m a little bit disappointed in the overall chocolateyness of it. Some of that is undoubtedly due to my having left out the coffee; perhaps I should make a hot-water-and-cocoa-powder slurry to replace it rather than just plain old tap water. I think it might be worth using a higher-test chocolate, perhaps that Guanaja that I passed up at Whole Foods. But as I’ve had two slices now, I’m coming to agree with Diane Duane that the crumb crust competes a bit too much with the filling. There are no spices on the ingredients list of my graham crackers, but there is molasses, and of course the brown sugar called for in the crust also has molasses, so perhaps that part of it. If I try this recipe again, I’ll make at least three changes: use a pastry crust, in a tart pan, with 70% chocolate rather than 64%.