A month or so ago, the CSAIL machine shop got a new milling machine to replace a Monarch milling machine from 1956 (seven years older than the Lab itself). I never used this machine — or indeed any of the other machine tools in the shop, not being exactly handy or physically creative. The old machine looked like this:

A couple of weeks ago, a grey metal cabinet showed up in a dead corner of our office. Sitting on top of the cabinet were a variety of chucks that had been used with the old milling machine. (There were still three other milling machines in the shop — an old Bridgeport vertical milling machine with a retrofit CNC controller, a newer vertical machine that was installed last year, and a 1952 Hardinge lathe, plus the new machine — but apparently these parts were either too worn to be useful or did not fit any of them.)

Then one day a week or so ago, Eric Prud’hommeaux dropped by to return some equipment that he had borrowed, before getting on a plane back to France. He had worked in a machine shop in a previous life, and when I opened up one of the drawers of the cabinet, he was impressed by what was inside: 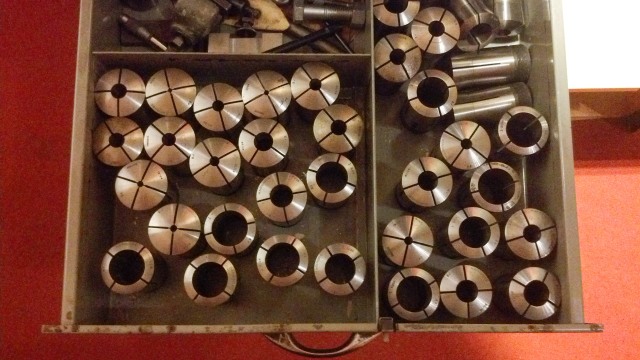 He picked one up, then another. He struck the two collets together, and I was surprised to hear tones coming from what I had assumed to be grimy machine-shop equipment. I shouldn’t have been so surprised: it’s obvious from the construction that each “finger” of the collet acts as a spring, so striking them together ought to produce oscillation, and since the four fingers are made to very precise dimensions, the vibrations of one ought to be amplified by the other three. Each collet had a different inside diameter, down to 1/64th of an inch, which meant that the fingers would have a different mass, and perhaps a different spring constant, effectively tuning each collet to a different frequency. A pure tone could be obtained by striking a single collet with a non-vibrating piece of metal — say, a chuck key.

The top drawer of the cabinet had a flip-up front, exposing this plywood carousel:

There are a series of holes drilled into the plywood, each marked with the inside diameter of the collet that would fit there. All of the collets, of course, would have the same outside diameter, since they had to fit in the same lathe. In this case (all of these collets are labeled “2J”, or perhaps “2U”), there is a screw fitting on the bottom to attach them to the machine. The old machine was hauled off to a warehouse where it would be stored for its new owner; the same person should be getting this cabinet, too.