Back in the summer of 2011, Diane Duane published a recipe on her blog for Tessinerbrot, which is the German name for a white bread from the Italian-speaking part of Switzerland. She adapted the recipe from the Web site of a bakery in Au, Bäckerei Sieber (apparently now Bäckerei Konditorei Cafe Sieber), hence the German-language name. I held onto this post in my feed reader for a long time, thinking it would interesting to try it, and today, while it was uncomfortably warm and pouring rain outside (thunder and lightning! in January!), I decided to give it a try. The recipe is a very simple, high-moisture style of the sort that are commonly used for “no-knead” and “bread-in-a-pot” varieties, but since I was looking for a sandwich loaf, I chose instead to use a standard 9-by-5 loaf pan. Here’s the result: 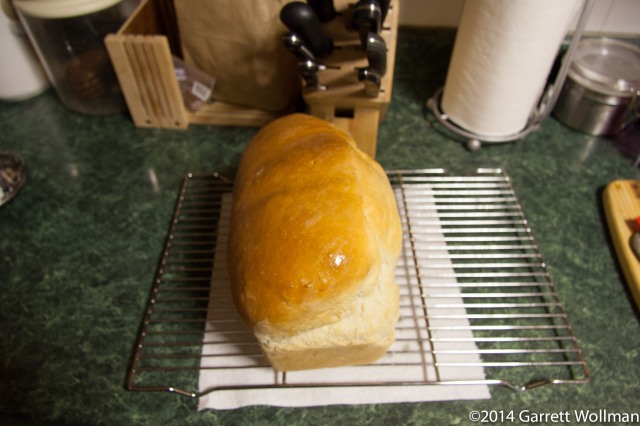 A loaf of Tessinerbrot, cooling on a rack

I ran into two issues. First, Duane’s adaptation of the recipe calls for a mass of “fresh” yeast (by which I assume is meant cake yeast, the kind commonly used by professional bakers but rarely found in the home), which she kindly gives as equivalent to a “packet” of dry yeast, but my dry yeast doesn’t come in packets, so a quantity would have been helpful. I started out trying to measure out the given mass as if it were “fresh”, but after putting nearly two tablespoons of yeast on the scale, I realized that that couldn’t possibly be right and stopped at 18 grams. (My recipe for a whole-wheat sandwich loaf calls for only two teaspoons!) The second issue was that I misread the recipe and used only 600 grams of bread flour (King Arthur’s Sir Lancelot unbleached high-gluten flour) rather than the 660 grams called for; while the dough was quite sticky, there did not appear to be any ill effects.

I departed a bit from the recipe after the first rise, choosing to use Alton Brown’s technique (from I’m Just Here for More Food) for shaping and proofing the loaf. This involves redistributing the yeast and popping any large bubbles by flattening the dough with your knuckles, then a three-way fold (like a wallet or a business letter) repeated three times, rotating the dough between each round of folding, then pinching the ends together to avoid unseemly cracks when the dough inflates in the oven. Then I proofed the dough in a lubricated non-stick baking pan (the one seen in the photo below) for about 35 minutes, until the dough crowned the top of the pan by about half an inch — which conveniently is just enough time to preheat the oven. 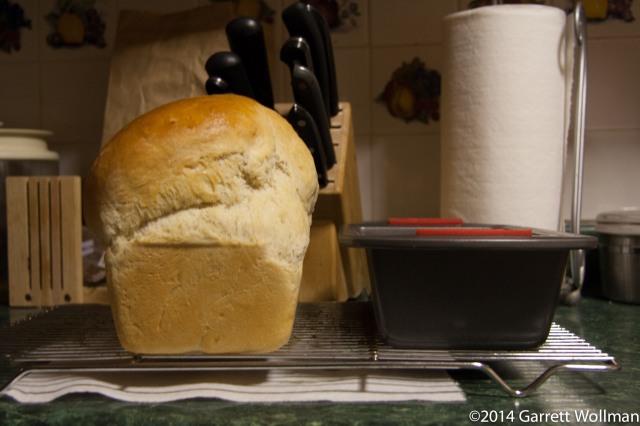 The loaf compared for size with the U.S. standard 9″×5″ loaf pan it was baked in

As you can see, this is a seriously large loaf. I got 16 slices out of it, but I’m a terrible slicer; I have to use the wooden slicing guide seen behind the loaf in the photo, and even with that help my slices still come out uneven. The top of the loaf doesn’t come this shiny straight from the oven: as soon as it came out, I brushed a bit of melted butter on the top. Once it was cool enough not to collapse, I sliced the bread and froze most of it. (Unfortunately, unpreserved bread and my kitchen do not get along, and any bread not frozen will be covered in mold after three or four days, and I want this bread to last for a whole week so I can make sandwiches!) 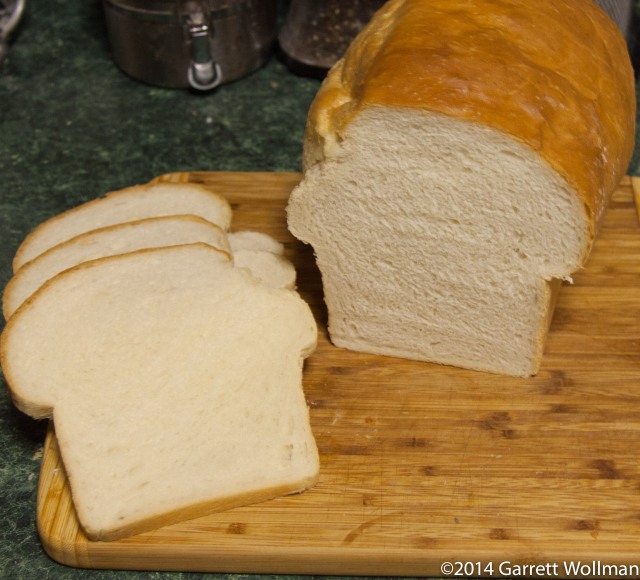 I’ll update this post with comments on the flavor and texture after I’ve had a chance to make a sandwich. In the mean time, here’s the nutrition data (note that this does not include the melted butter I put on top):

This entry was posted in Food and tagged bread, Diane Duane, recipe. Bookmark the permalink.