As I promised a few days ago, I made the split-pea soup from Joanne Chang’s flour, too. Overall, I’m reasonably pleased with how it came out, although I might do a few things differently. (I should note that Chang does not take credit for developing the original recipe; she credits it to one of her chefs at her Flour bakery-cafe. But it does appear in her cookbook, so that’s how I’m going to refer to it here.)

The recipe starts with a vegetable “stock”, from a section of “essentials” in the back of the cookbook. I put “stock” in quotation marks because, in my book, a stock is made with bones, and vegetables don’t have bones, so this can only be a broth. It’s a very simple broth at that: onion, celery, carrot, fennel seed, and coriander seed.

The pea-soup recipe calls for two quarts of vegetable “stock”, which takes about 45 minutes to prepare.

The short cooking time doesn’t seem to be enough to extract much flavor from the “stock” — or perhaps my interpretation of “simmer” is different from Chang’s. In any case, after straining, the result looks like this: 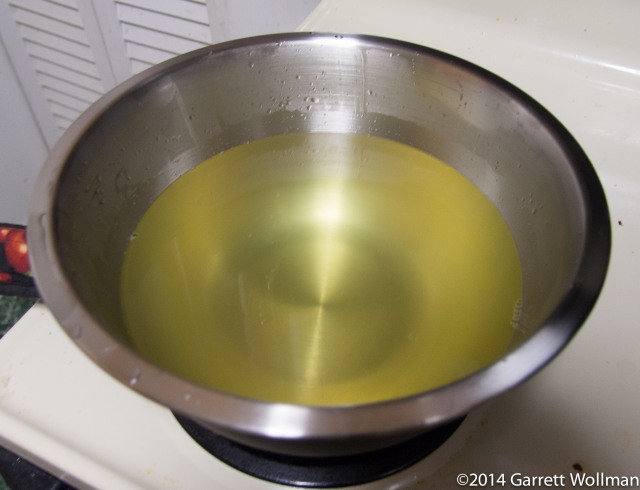 Vegetable “stock” , shown here in a bowl after the solids have been strained out.

I tried a spoonful; it really tastes like nothing so much as celery water. (Which is at least better than it looks!) If I had to do it over again, I might skip this step in favor of a commercial low-sodium vegetable broth. The choice of spices is a bit unusual, compared to commercial vegetable broth, so that might be an issue. On the other hand, since the broth is just a base for making a ham stock, perhaps plain water could be used instead. The ham stock also contains onion and carrot, and in addition has a chopped leek, an unusual ingredient that I could not identify in the final product. My two ham hocks were unfortunately lacking in both meat and smoky flavor; I found myself at the end of the process wanting to find some additional ham (I have some in the freezer, I think) just to make up for them.

After adding the peas (which I forgot to rinse) and cooking for only the minimum time recommended in the recipe, I found that the soup was already getting a bit thicker than I had anticipated. The recipe calls for pureeing half of the soup at this stage (I transferred a few ladlefuls to a spare pot and used an immersion blender), but I’m not convinced it was necessary, given the texture of the peas by this point.

Two more unusual ingredients were added at the last moment: lemon juice and chopped parsley. I found that, even after a day in the refrigerator, these lent a fresh green color and bright acidity often lacking in split-pea soups. However, I did feel the lack of actual meat — there were only a few small pieces in my 1-1/2-cup bowlful — and smoky flavor that would put this soup over the top. Next time, if there is a next time, I’ll try harder to find a ham shank, which Chang says will give more meat than the hocks, and I’ll consider adding some liquid smoke at the very end if there’s still not enough smokiness. It was really late (about 10 PM) when I finally finished the soup — I had long since eaten something else for dinner — so I put the entire quantity of soup in the refrigerator for later portioning, and had a bowl for dinner tonight (Monday).

I overfilled a half-cup ladle to give an estimated 1-1/2 cups of soup in this bowl, which looks about right for a serving. Note the one visible slice of carrot.

This entry was posted in Food and tagged Joanne Chang, pea soup, pork, recipe. Bookmark the permalink.
%d bloggers like this: