Last weekend I made the notably unsuccessful “cherries and cream pie” (see writeup), and of course that meant I had leftover cream cheese (that recipe only took a quarter of a cup) and sour cream, two ingredients which I rarely have any use for in everyday cooking. So in order to use them up before they spoiled, I went looking for recipes that would use both. Cheesecakes were out of the question, since they typically require much more than I had on hand, and tend to be written to require an exact number of packages of the Leading National Brand. Any number of recipes call for sour cream alone, which didn’t help dispose of the cream cheese, but I settled on the cream-cheese brownie recipe from last month’s Cook’s Illustrated. (For cooksillustrated.com subscribers, that’s this recipe from 2014, not this recipe from 1999.)

This recipe was a bit fussier than the traditional brownie recipe, which is hardly surprising considering that what we’re making is effectively two desserts — a brownie and a cheesecake — which are baked together in one pan, but are supposed to retain at least some of their distinctness. That means dirtying a lot of bowls (I ended up using four — one for the chocolate and butter, one for the dry team, one for the cream-cheese mixture, and one for the wet ingredients). I think it turned out pretty good:

I didn’t do as good a job of swirling the cheesecake into the brownie batter as shown in the printed recipe. Also, the recipe calls for 2″x2″ brownies, which is ridiculous; an 8×8 pan makes nine brownies, no more. Here’s the center piece: 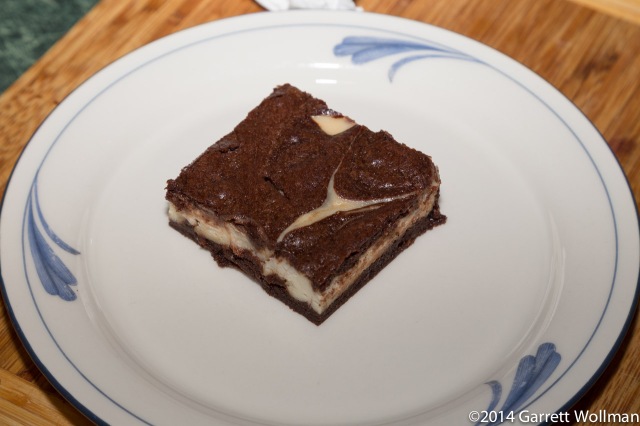 Of course, that does mean that as I made them, they’re a bit calorie-heavy. I see no reason you couldn’t make this recipe in a 9×9 pan instead, and then it wouldn’t be ridiculous to get 16 (somewhat thinner) brownies. But doubling the recipe and baking in a 9×13 pan (with appropriate adjustment to the cooking time) would seem quite practical as well, if you’re not in the position that I was of trying to get rid of leftovers! (I think commercial bakers tend to make brownies in half-sheet or even full-sheet pans, which are just too shallow for proper brownie construction, in my humble opinion.)

Multiply everything by 9/16 (approximately 0.56) for the 2×2 brownies specified in the recipe (yield 16). Either way, a special treat, not an every-day dessert. I’ll be freezing some of these, or giving them away to colleagues.