Continuing to explore the Four & Twenty Blackbirds Pie Book (Emily & Melissa Elsen, 2013), since it is now fall, it’s time to move on to that section of the cookbook, which is intended to reflect seasonally available ingredients. Among the recipes that I noted was a Concord grape pie — something I had never heard of, and from talking to my work colleagues, it appears to be unfamiliar to them as well. 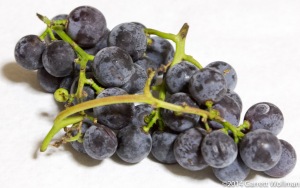 These are Concord grapes. Most people (in the US at least) are probably familiar with them from their childhood as the source of the standard purple grape juice we all used to drink — usually Welch’s brand. A note to Californians: the Concord grape is named after the town in Massachusetts, not the city in California; thus, it is pronounced “conquered”, not like the city in the East Bay or the common noun “concord”. Concord grapes are a cultivar of Vitis labrusca, unlike most of the grapes used for winemaking (which are V. vinifera), although some Kosher wines are made from Concord grapes. They have a wonderful intense flavor and aroma, but because they have seeds, they are almost never used as table grapes.

Of course, every pie starts with a crust, The Elsens make this a double-crust pie, but use a ten-inch tart pan rather than the usual nine-inch Pyrex pie plate. I used their “All-Butter Pie Crust” (a standard pâte brisée), which I had previously prepared in anticipation of this round of pie-making. I departed from the instructions at this point to use the Cook’s Illustrated method of lining a tart pan. First, the dough is rolled out to the appropriate diameter on a parchment sheet:

This is placed on a cookie sheet and frozen for several minutes to stiffen the dough. The lubricated tart pan is then inverted over the center of the dough: 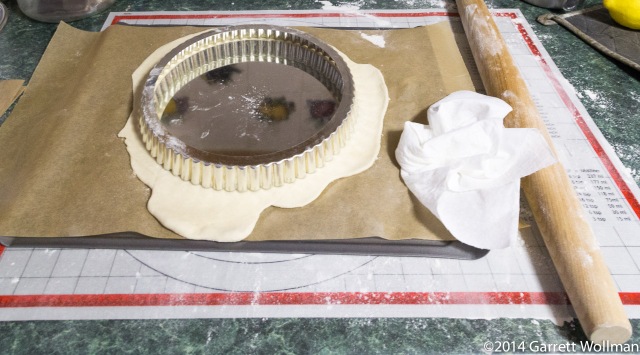 Then the whole assembly is flipped over, leaving the stiff crust on top of the tart ring, and the rolling pin is used to cut the dough to the exact shape of the tart pan. 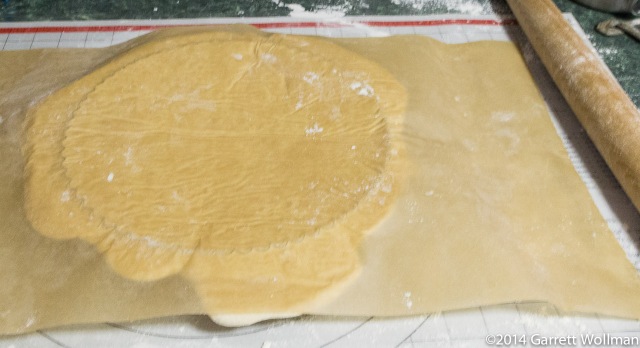 After a while, the dough warms up and softens, and it slips down into the bottom of the tart pan. (Sometimes it needs a little help.) 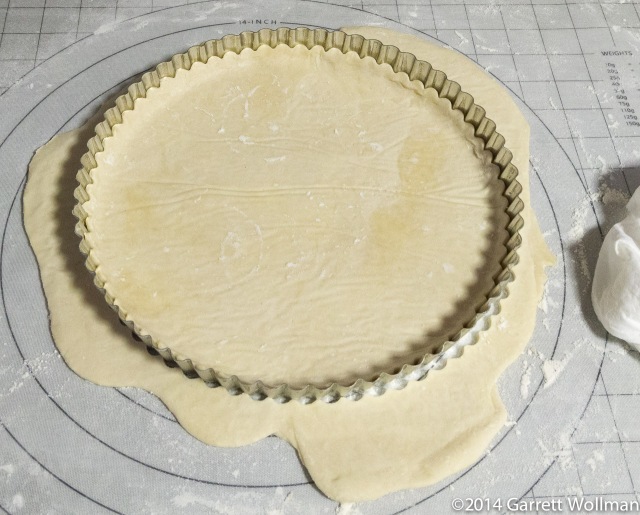 The sides of the tart are constructed by rolling the remaining scraps of dough into a thin rope and then pressing them into the tart pan to make a tight seal with the fluted edges. 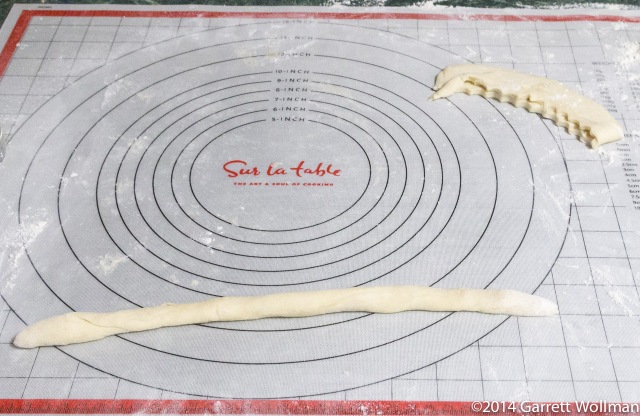 Surprisingly, this recipe does not call for blind-baking the bottom crust. The top crust can be either rolled out into a disc, or cut into triangles which will be laid askew atop the pie. I opted for the second option, which for various reasons I’ll get to later didn’t turn out so well. Both crusts go into the refrigerator at this point, because the filling still has to be made.

The weighing, stemming, and pulping of two pounds of Concord grapes takes by far the most time of any process in this recipe, other than the actual baking (and even that is divided into two parts). I didn’t keep a timer on, but I’m fairly certain I took more than an hour to pick over the grapes. A surprising fact about Concord grapes is that only the skins are purple: what we think of as the canonical childhood example of a purple food, grape juice, is actually a translucent greenish, the same color as the grape pulp itself; the juice we drank as kids only became purple because the skins were ground up and mixed in with the pulp. (The purple, of course, comes from anthocyanins, those antioxidant polyphenols that also give blueberries, blackberries, and red cabbage their colors.) A common feature of labrusca grapes is that the skin separates easily from the pulp, so it’s a simple matter of squeezing each grape to extract the juicy bit from the chewy skin. After all of that process, what’s left is a saucepan full of green grape pulp and juice, and another bowl of purple grape skins. Here again I departed a bit from the recipe: they say to chop the skins, and I expect they mean to do it with a knife; not caring much for the idea of staining my clothing, my cutting board, and my hands purple, I figured that I would use the proper tool for the job: the food processor. 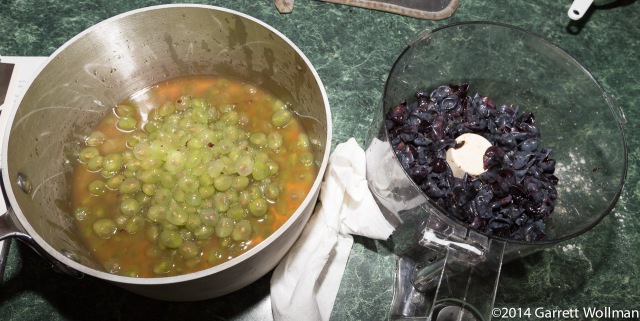 While the skins need only be chopped, the pulp is cooked a good bit to reduce the water content and break it down some more. The instructions at this point say to press the cooked pulp through a sieve, but again, I have the proper tool for that job, a food mill. It made short work of separating the grape seeds from the pulp (and boy are there a lot of seeds in two pounds of grapes!). Both pulp and skins are then mixed back together, along with sugar, arrowroot, lemon juice, spices, and an egg to form the pie filling: 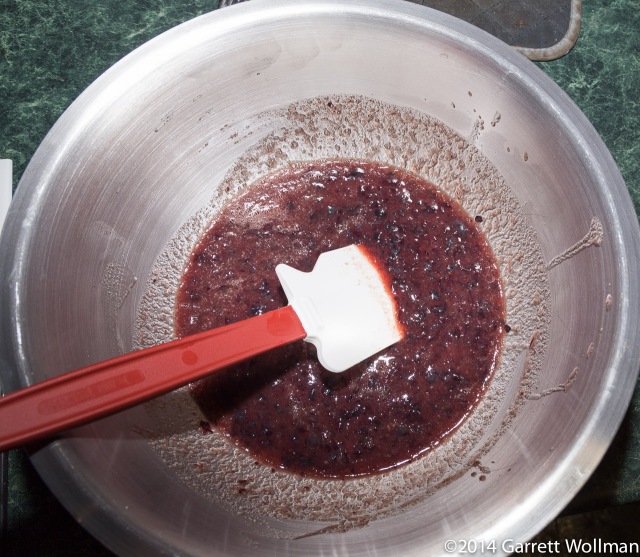 Here is the point at which I realize that, like always, I forgot to take one picture: the filled pie before it went into the oven. The pie filling came nearly to the rim of the tart pan, and when I added the triangles of dough to the top, they quickly began to sink into the filling, which looked like it wanted to overflow. I removed a few tablespoons of filling, but it was not enough — good thing pies are baked on a foil-lined sheet pan to contain such messes: 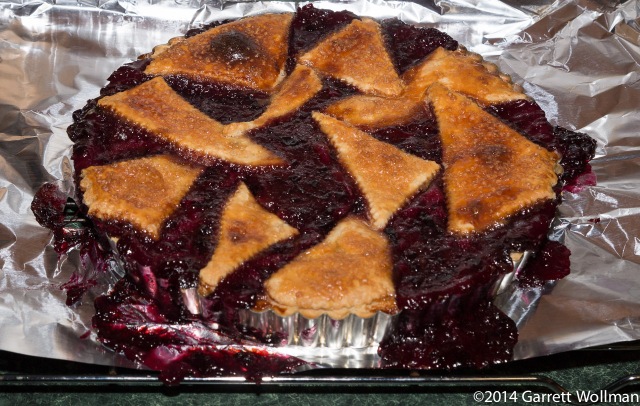 The top crust, by the way, was brushed with egg wash and coated with Demerara sugar, thus the glazed appearance. It’s incredibly difficult to brush the crust with egg wash when it’s already sinking into the pie filling; if I had to do it over again, I would roll the top crust much thinner, and apply the egg wash before putting the top onto the pie. (Or I could just make a traditional double crust, which would have been easier to fabricate anyway and would actually seal the edges.) And this pie is worth making again, despite all the work and the missteps; it’s incredibly tasty — much more sophisticated than it looks. (You’d expect something that tasted like a tart shell filled with grape jelly, and it’s very much more than that.) After cooling for a few hours, I removed the tart ring, so you can see at least the bottom crust worked out OK (although it wasn’t quite as browned as I would have liked): 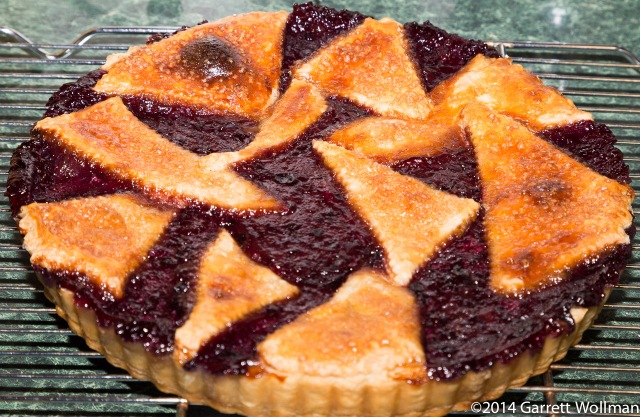 The recipe says that this pie can be stored at room temperature for a couple of days, so I left it out overnight Sunday (since I finished dinner long before it was ready) and all day Monday before cutting a slice to eat: 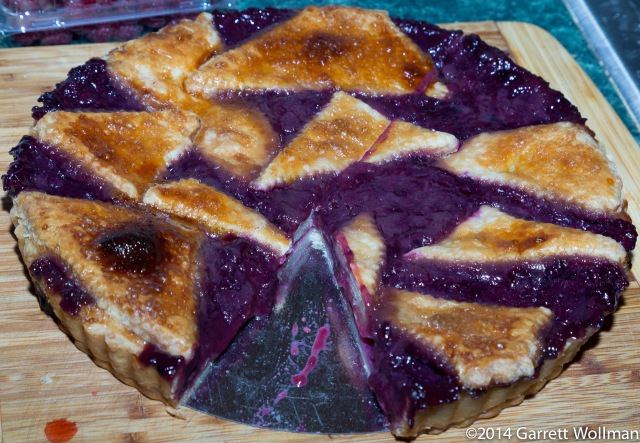 It’s clearer from the individual slice that the top crust was rather too thick — this probably accounts for the way it sank into the filling: 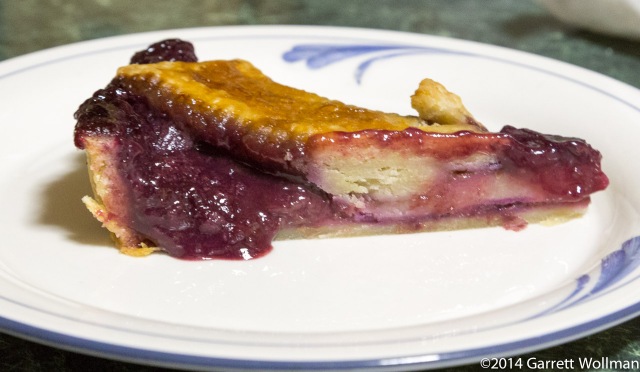 Now for the bad news.