It’s been a busy cooking weekend for me: in addition to yesterday’s truffles, I also did a black-walnut pie from Four & Twenty Blackbirds’ cookbook (post to come later this week), and I finished the weekend off with a huge batch of chili con carne — one of several chili recipes I’m looking to try out during the cold season. This chili recipe ($) comes from Cook’s Country, August 2012, and also appeared on Cook’s Country TV #610, “Get Your Chile Fix” (and not to be confused with Cook’s Country‘s December, 2011 recipe also called “Five-Alarm Chili”).

I ended up making a couple of substitutions. First off, this recipe calls for a cup and a half of beer (bleah). Since they say you can use cheap American lager, well, that’s not all that much different from water, is it? So a cup and a half of water replaced the beer. Second, I was unable to find dried whole ancho chiles in the store. Plenty of ancho powder, but none of the whole chiles — I could see where they should have been on the rack. So I just used another dried chile (labeled “New Mexico” but I don’t know exactly what kind). Two ounces of dried chiles is quite a lot, whichever kind you get: 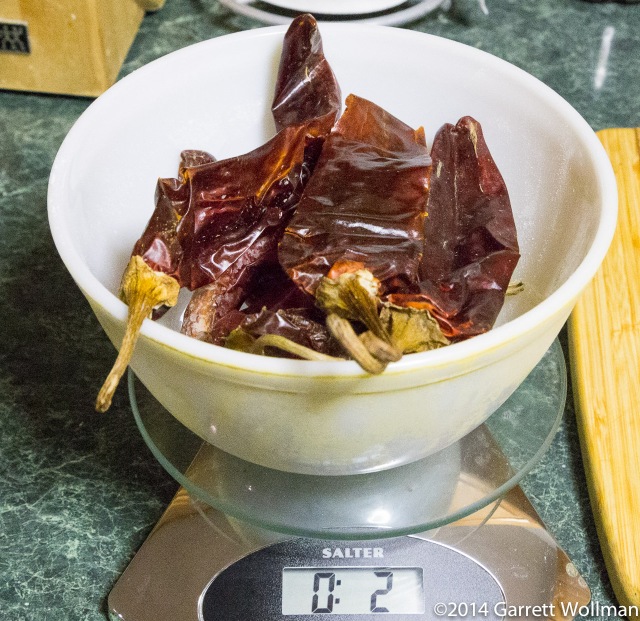 After stemming and seeding, the dried chiles are 30% lighter:

These chiles are steeped in hot water, which is then discarded and the rehydrated chiles are ground up in a blender, along with a can of whole tomatoes (I used the Muir Glen “fire roasted” variety) and some ground-up corn tortilla chips. (This dodge, also used by Alton Brown, replaces the masa harina which traditionally would thicken this stew.) 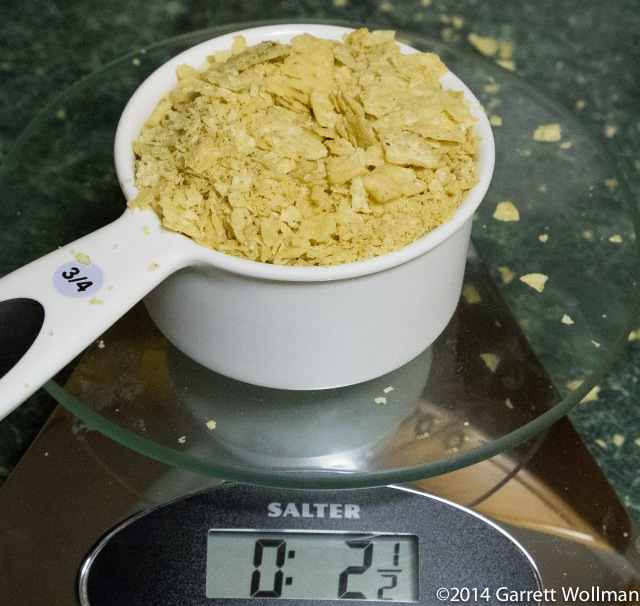 I would have been happy to buy masa harina, which can more easily be sealed up and used again later, but apparently this is a scary foreign ingredient that the readers of Cook’s Country are unable to find in their neighborhood Walmart Supercenter. In any event, all of these ingredients are supposed to be ground up together in a blender: 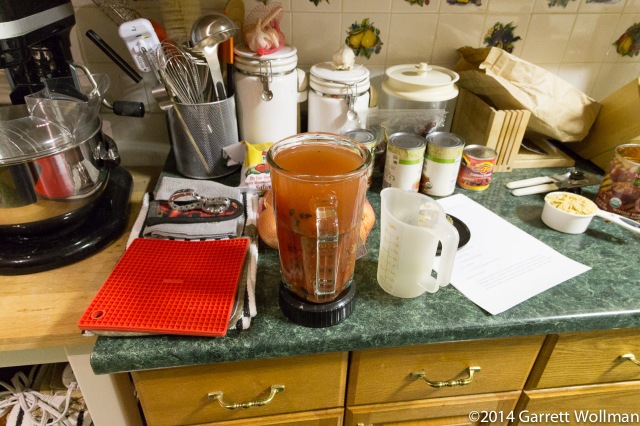 Oops. My blender is not big enough to hold the tomatoes and the water — never mind rehydrated chiles, ground corn chips, and chipotles en adobo. So I dumped all of those ingredients into a big pot and got out the immersion blender instead. A few minutes with the stick et voilà: 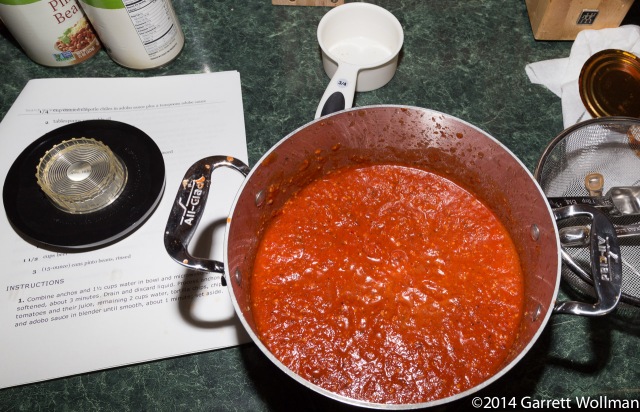 This is just the flavor base for the chili; there’s still the meat and the aromatics to go. Quite a bit of them, in fact: the recipe calls for two whole pounds of onion, and an equal amount of meat (not to mention nearly three pounds of pinto beans — I did say it made a huge quantity).

I’m not going to do a fine chop of all this onion by hand. Luckily, we have tools for doing just that — and although I had to divide the onions into two batches, the food processor still finished the job in only half a minute:

Before I get to cook the onions, I need to brown off the meat: two pounds of 85% lean ground beef. (I used grass-fed, of course, but Cook’s Country readers probably don’t. Why does Whole Foods even sell corn-fattened beef any more?) That’s not much to look at, but I took a picture anyway:

The beef is drained in a colander while the onions and fresh chiles are cooked; garlic and ground spices are added at the end, followed by the beer water, beef, beans, and flavor base, all of which are mixed together and then simmered for just under an hour: 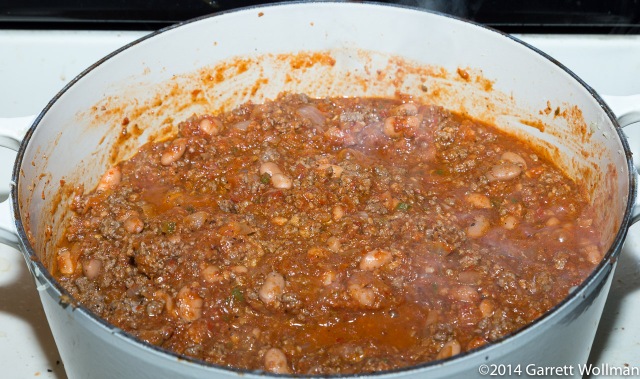 To finish, you can garnish with chopped scallions, grated cheese, or do like I did and add a dollop of sour cream: