Almost a week late, here’s a quick rundown on the delicious black walnut pie I made six days ago. The recipe comes from Emily and Melissa Elsen, The Four & Twenty Blackbirds Pie Book, like most of the pies I’ve baked recently, and it’s the last of their “Fall” seasonal pies on my list. It starts, of course, with toasted black walnuts. Black walnuts are the native American walnut, but because they are more convoluted than English (aka Persian) walnuts, they are more difficult to shell, which makes them more expensive; they are only seen as smallish broken pieces, never “whole”, unless you happen to have a black walnut tree in your yard. (And you probably don’t want to: walnuts whether black or English are drupes, and the ripe fruit — which must be stripped off to get to the nut — contains a very powerful dark brown pigment that stains anything it touches.)

Black walnuts have a delicate, fruity fragrance which makes them far more interesting in flavor, however, to make up for the increased scarcity. I bought a pound of them by mail order from Hammons Products, one of the principal processors and distributors of black walnuts, located in Missouri near the most of the orchards that grow black walnuts as a cash crop. (In addition to retail and wholesale black walnuts, Hammons also sells black-walnut confections.)

The Elsens recommend their “cornmeal” pie crust rather than the “all-butter” crust used for most of the other recipes I’ve tried so far. After partial blind baking it looks like this:

I honestly could not tell the difference between this shell and the regular (all wheat flour) recipe. The recipe continues with an “apple cider caramel”, which looked to me nothing like any caramel I’ve ever made. (Not for the first time with this cookbook, either — one of these days I’ll have to do a side-by-side comparison of their recipe and a normal caramel to see which one actually turns out better. My experience with the Elsens’ “caramel” recipes is that the foaming of the butter, which they add at the beginning, makes it very difficult to actually tell when the sugar is at the right stage, and I don’t think the temperatures they suggest are anywhere near correct for proper caramel. A normal caramel procedure would be to brown the sugar, then quench with liquid, then stir in butter off the heat — see, for example, the Cook’s Illustrated chocolate caramel walnut tart, which I’ll be making again this year with leftover black walnuts.) In any event, the sugar mixture is cooled and used to make an egg custard, with the addition of some cornmeal as a thickener, and, of course, the toasted black walnuts. The whole process is very similar to a pecan pie, or to the black bottom oatmeal pie I did a few weeks back, but with a flavorful cooked-sugar syrup rather than corn syrup.

I found that my pie was way underdone after the recommended 30 minutes of cooking time, and ended up giving it another ten minutes. When I finally took it out, it looked like this:

The Elsens do caution, however, “Be careful not to overbake, or the custard can separate”, and I suspect that’s what happened here:

If you look closely, you can see that the filling has in fact separated into a yellow, eggy custard layer on the bottom and a sweet, syrupy layer between that and the nutty bits on top. Nobody at the office seemed to notice, but I did, which tells me that my pie-doneness-determining skills still need some work. Here’s what the rest of the pie looks like: 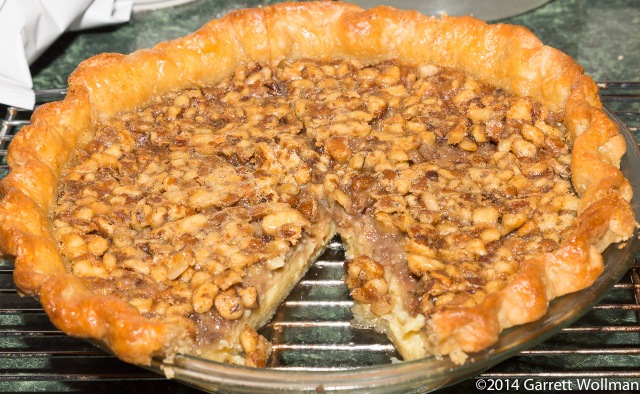 I figured this pie based on eight slices, which makes it look a bit worse than other pies I’ve done recently, but is perhaps more realistic. (I always have trouble trying to get ten slices out of a pie — maybe I should buy one of those professional pie slicing devices they use in bakeries!)

Here is the data for the cornmeal pie crust alone: