Last Monday, we held the first ever (so far as I can tell) CSAIL Holiday Baking Fest. It was not quite as well attended as I would have liked, but all the food did get eaten. (I ate rather too much.) I’m still willing to count it as a success, even if it was just the start of an entire week of excess. The scheduling was rather tight: I wanted to make sure it was open for students (both as bakers and as eaters), which meant doing it before the last day of classes on Wednesday, but I would be in Southern California for all of Thanksgiving week through the following Wednesday, so Monday was pretty much the only day that would work. The CSAIL Student Committee agreed to subsidize the bakers, if they retained receipts for their expenses.

I made four items; all told we had about 25 items, with most of the other bakers contributing one or two items. One baker made pizza (not sweet but still baked), and one baker made sugar-coated fresh cranberries (sweet but not baked). Not everything arrived before the official start of the event, so I didn’t managed to get pictures of everything all laid out like I had intended. (I also forgot to take a picture showing one of my own items — how embarrassing!)

A few notes on the recipes and ingredients before I get to the pictures. I had made makowiec from this recipe a couple of times before; it calls for a whole pound of poppy seeds for two approximately 14″ loaves, which implies going to a specialty spice retailer rather than paying the horrendous supermarket prices for the little bottles. My usual choice is The Spice House, which sells Dutch “A-1 Extra Fancy” blue poppy seed for $12 a pound, already ground — which results in a much better texture than the original Fresh Loaf recipe results in. However, I had to add some water to the poppy seed mixture — the original recipe boils the seeds before mashing them in the food processor — as a part of the cooking process. I got my candied orange peel from Nuts.com (why doesn’t The Spice House sell this?), and used leftover Hammons black walnuts and McLure’s orange blossom honey. The golden raisins I got from the bulk bin at Whole Foods looked a bit dessicated, so I plumped them up by soaking them with a tablespoon of leftover dark rum (not shown in the recipe but the tasters seemed to like it). For the sour cream, I used my favorite organic sour cream from Wallaby Yogurt — but this sour cream is much stiffer and less watery than other sour creams, and probably contributed to my mixer getting broken, as the final bread dough was extremely stiff.

For all three tarts, I used Sky Top Farms‘ unhomogenized organic grass-fed heavy cream (BINGO!); the cream that was left over — about a cup — I brought in with me and whipped up with superfine sugar and vanilla for those who wanted a bit of extra dairy fat with their chocolate custards. (There was still about a third of it left over at the end of the event!) I used more of the leftover black walnuts in the walnut tart, and I used Callebaut 811NV for both of the recipes which called for “semisweet” chocolate (the green chile and the walnut tart); for Joanne Chang’s chocolate tart, which called for 70% chocolate, I used Chuao 72% dark chocolate tasting discs. (When I computed the nutritional details for this pie, I instead used Valrhona Guanaja, which is more easily available where I am, but I had just brought a whole bag of Chuao product back from San Diego when I baked this tart.) I made one other significant substitution, albeit unintentional: I accidentally used Four & Twenty Blackbirds‘ regular “all butter” crust instead of the chocolate crust specified in the recipe. All the flour was King Arthur, and I used Wholesome Sweeteners sugar (both sold in the baking aisle at Whole Foods); I used Country Hen eggs and, for the recipes calling for milk, Organic Valley whole milk (chosen principally because it was the non-Dean Foods milk sold in the smallest container — I would have bought a different brand if it had been available in quarts).

Conveniently, the three tarts specified different pans — Chang’s tart called for a ten-inch tart pan, the Cook’s Illustrated tart uses a nine-inch tart pan, and the Blackbirds pie uses a nine-inch springform pan — so I didn’t have to go out and buy a bunch of new tart pans to accompany the half-dozen Pyrex pie plates in my cupboard!

I got a colleague to bring a flat cart down to the parking garage so I could take all of my items up in one trip. Sitting between the two loaves of makowiec is a mise cup with fresh lemon juice, used (with powdered sugar) to make the glaze for the bread. The plastic container at center is sitting on top of the cookbooks, magazine, and printout used for the four recipes, which I displayed on the table next to each item so guests could see how they were made. (I didn’t make signs for everyone’s items, but as you’ll see, some bakers made their own signs.) 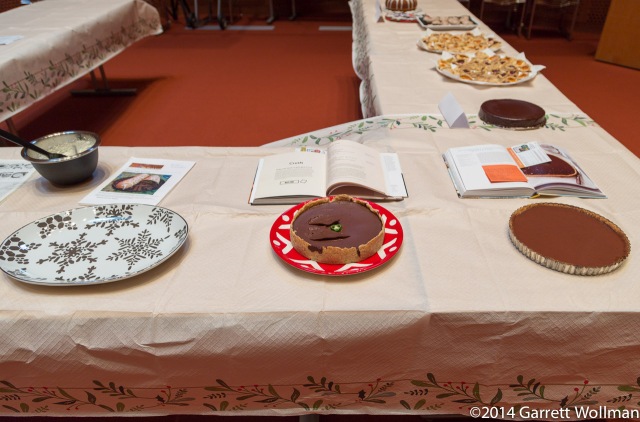 Here you can see the empty serving platter where the makowiec would eventually go (after I managed to get them sliced), and two of my tarts. I think I liked the Joanne Chang tart the best — note the layer of dutch-process cocoa powder on top, which was sifted on immediately prior to service — due to its intense chocolatey flavor, but they were all great. In fact, I think almost everything I tried was great. Although the recipe doesn’t call for it, I put a slice of jalapeno on top of the green-chile tart as a warning to those who are sensitive to spicy food (or perhaps an advertisement to those who enjoy spicy food).

The spot next to my walnut tart eventually got filled with something, I think.

Ari Anders’ chocolate-dipped chocolate-chip cookies (which were delicious) are sandwiched between Sue Felshin’s “hickory nut” (pecan) cake, on the left, and Sue’s rather boozy truffles on the right.

On the left, Fern Keniston’s hamentashen; in the middle, some sort of meringue (were these Sue Perez’s cocoa kisses?); and on the right, two items from Vicky Palay: eggnog bundt cake and intricately decorated chocolate sugar cookies. (None of which I tried, having blown my calorie quota quite early!) Vicky’s cookies were so pretty that nobody wanted to be the first to take one, so they lasted rather longer than some of the other items.

Shirley Hung’s orange-almond chocolate torte was amazing despite being totally gluten-free (all of the protein structure came from ground almonds). At far left, Sue Felshin’s disembodied hand is helping out by slicing one of my tarts for service. In the far background at left is a tray of grasshoppers made by Tiffany Luongo.

After about 45 minutes, I broke away from my station for a little while to take photos of the crowd (and also of those items which had arrived late). Overall I would have liked to see about a hundred more people, and maybe five more bakers, but I’m still pleased with the results nonetheless. (This is CSAIL’s famous “Kiva” seminar room, which makes some people seasick due to the optical illusion of tilting caused by the pattern of the walls.)

Some of the late arrivals: Tristan Naumann’s sugared cranberries, Sally Lee’s cupcakes, Danielle Pace’s intense chocolate torte, and I’m not sure whose those cookies at the end were.

That’s all that was left of Danielle’s chocolate torte by the time I got to it. (Which is probably a good thing, since I had already eaten way too much by then!)

I have absolutely no idea who brought the pizzas — and unsurprisingly, “sweet potato and onion” was a bit more popular than “froot loop” pizza. All four did eventually get eaten, however. The pumpkin pie was from Patrice Macaluso, the same recipe she did for our Pumpkin Pie Fest back in October.

I’m hoping that we can do more of these events — perhaps one in the spring in addition to one around the winter holidays — but I need someone else to do the organizing for a while. I’m hoping someone from the Student Committee will step up and do it — the students often don’t have the ability or facilities to do the baking themselves, but all that’s required for organizing is time. (Well, time and the ability to send email and maintain a Web page, but our students have been doing that pretty much since they could read.)