If it seems to you like I’ve spent a lot of time over the past year baking from just a handful of cookbooks, you’d be right. Leaving the same books in a pile on one’s dinner table can have that effect. Today’s recipe is from a totally new source: Rosetta Costantino’s Southern Italian Desserts (2013). The cover illustration is a delicious looking Crostata al Gelo di Mellone, which I’d love to make, but strangely enough, there’s no watermelon in the supermarket in February, so instead I made a Torta Caprese — which is both a flourless chocolate cake, like I made last weekend, and an almond cake, like I made three weekends ago. The cake takes its name from the island of Capri, which is associated with the Campania region of Italy; Costantino’s book is organized by region. She tells an entertaining story of this dish’s origin, which may or may not be true; it is attributed to the pastry chef Carmine Di Fiore. 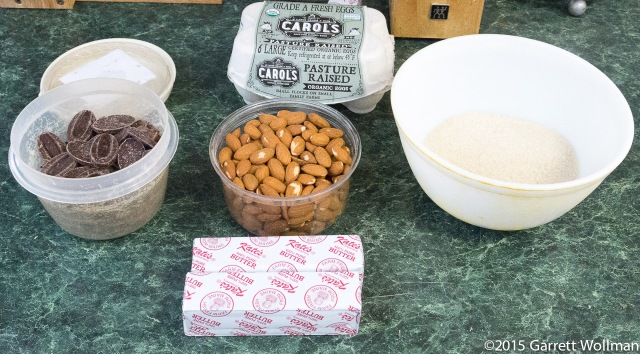 I’ll start as usual with the mise en place. Like many of Costantino’s recipes, the parts list is a simple one — almonds, chocolate, eggs, sugar, and butter. (I didn’t use the optional coffee liqueur.) There’s also a pinch of salt. The recipe calls for half a pound (225 g) of 55-60% dark chocolate; I used a combination of Callebaut 54% and Valrhona 70% to make up the required quantity (mostly because I had eaten too much of the Callebaut already). 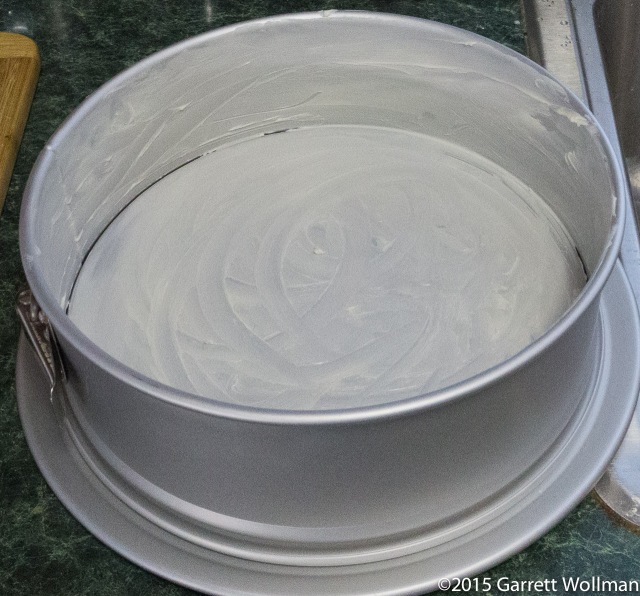 The recipe calls for a buttered springform pan. I did not use baking spray as that would compromise the gluten-free nature of this cake — although I don’t know of any potential eaters who suffer from celiac sprue. Not having made this recipe before, I was not sure how high it would come up the sides, so I buttered all three inches of the springform pan’s ring; as you’ll see, it did not rise nearly that high. (I suspect it could easily have been made in a regular 10-inch cake pan like the one I bought for last week’s cake, with a parchment disc on the bottom for easy release.) 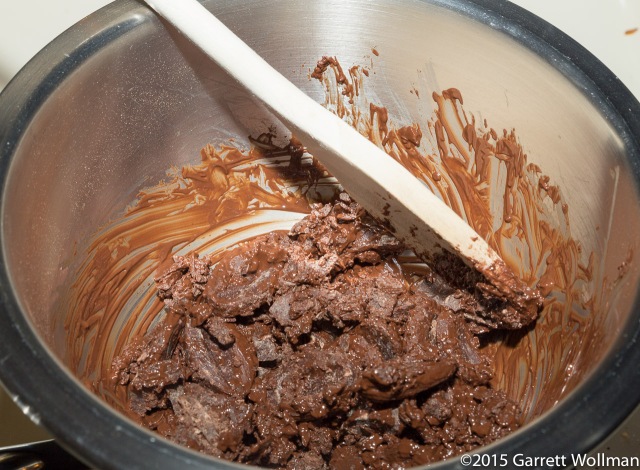 The chocolate is melted in a double boiler and allowed to cool before proceeding with the rest of the recipe. As seen here it’s about halfway melted. 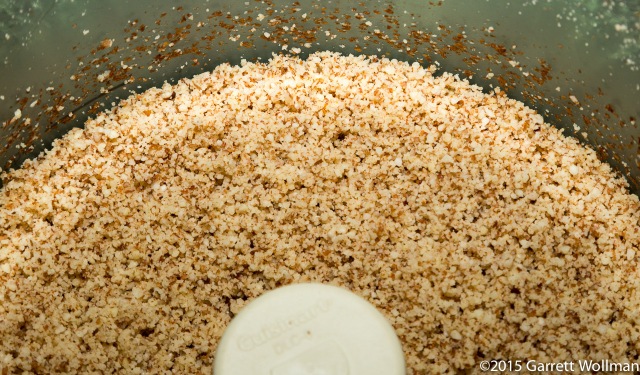 The almonds are supposed to be ground “until they have the texture of coarse cornmeal”; I’m not sure I managed that, but my food processor really wasn’t making these bits any smaller. (I’m not sure what kitchen tool I would have to use to really get them ground up into almond flour or almond butter, but my Cuisinart does not appear to be it.) 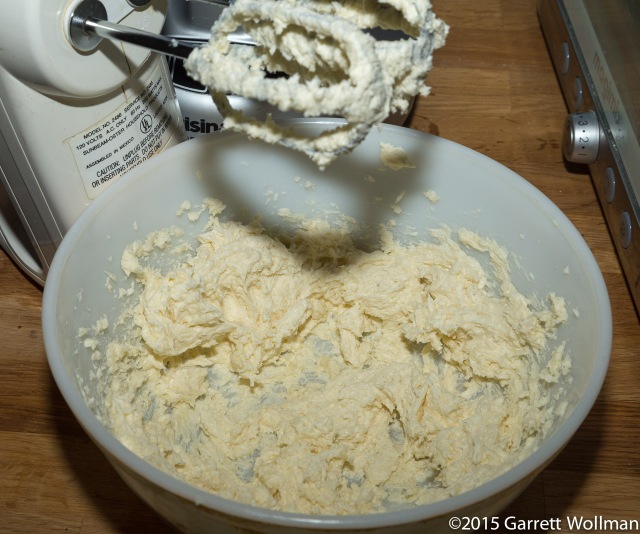 Next, the butter and half of the sugar are creamed together. If you’ve been reading my recipe posts for a while, you might scratch your head for a moment at this picture. “Doesn’t that dude have a KitchenAid stand mixer? Why’s he using a hand mixer for this?” All will be answered in good time. For now, I will only point out that I probably should have let the butter soften a bit more than I did; this process would have gone quite a bit more easily had I done so. 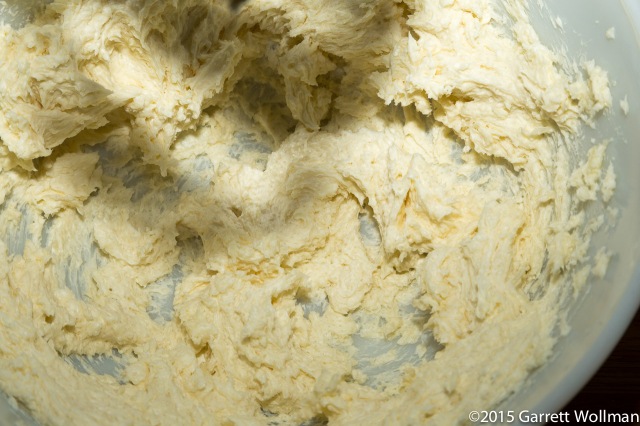 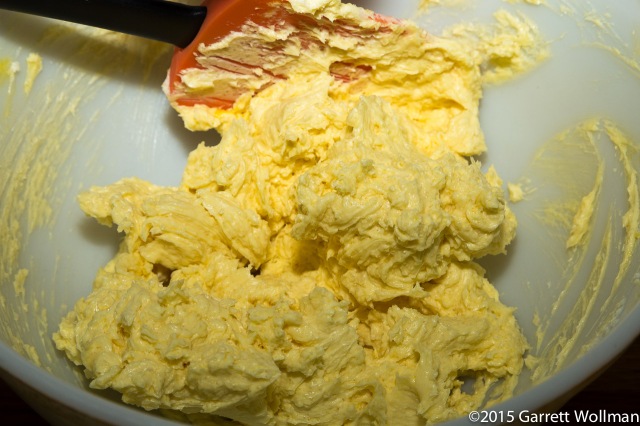 One by one, five egg yolks are beaten into the creamed butter-sugar mixture, changing the color substantially, but not making much of a difference to the texture, as shown in the before-and-after pair of photos above. 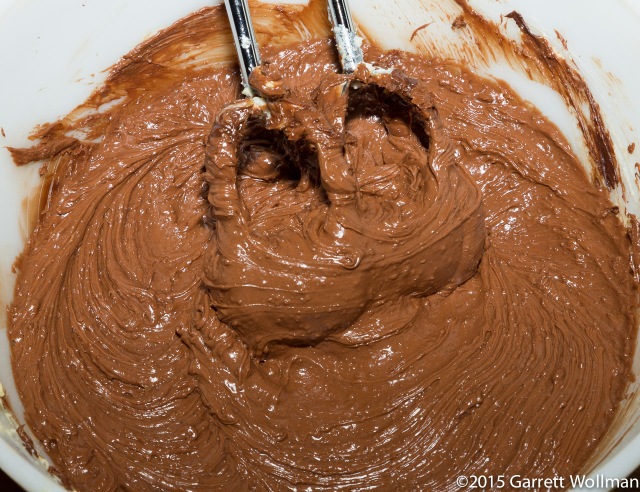 Now the cooled, but still liquid, chocolate is beaten into the butter-sugar-egg mixture. 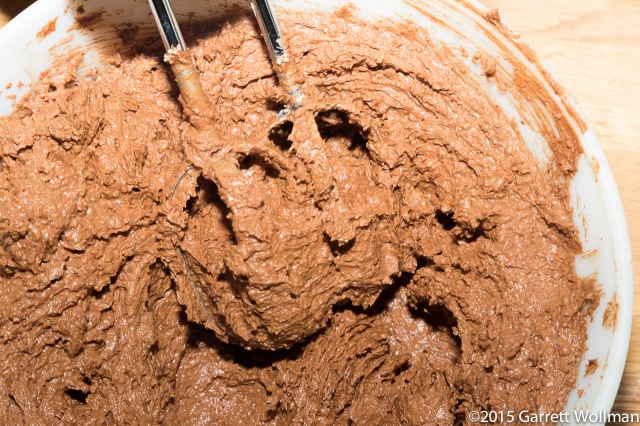 And finally, the ground almonds are beaten in. Now it’s time to put aside the hand mixer and the bowl of what looks at this stage like a chocolate-cookie batter, and move over to the stand mixer, to make a meringue from the remaining egg whites and sugar. (Why not use the stand mixer for both? Because the fat in the main part of the batter will deflate an egg-white foam, and it would take too long to properly clean the bowl before making the meringue. Yes, I could have brought my other stand mixer up from the basement, but I’m looking to sell that one and have no room on the countertop for it anyway.) 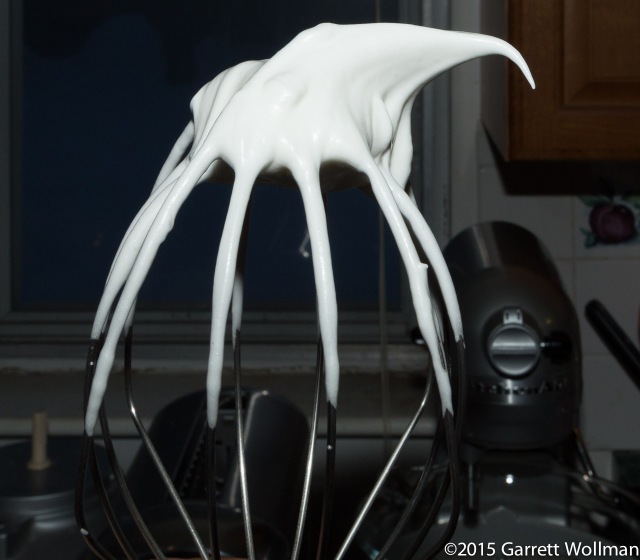 The egg whites are supposed to be beaten “until firm peaks form that are not at all dry”. I don’t really know what that means, but I figured this was probably good enough. 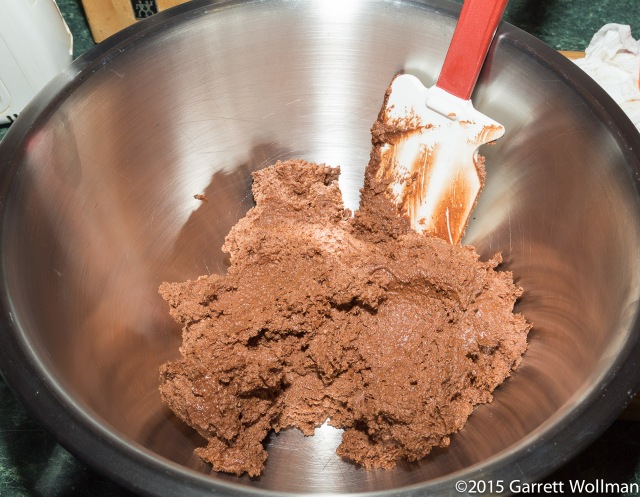 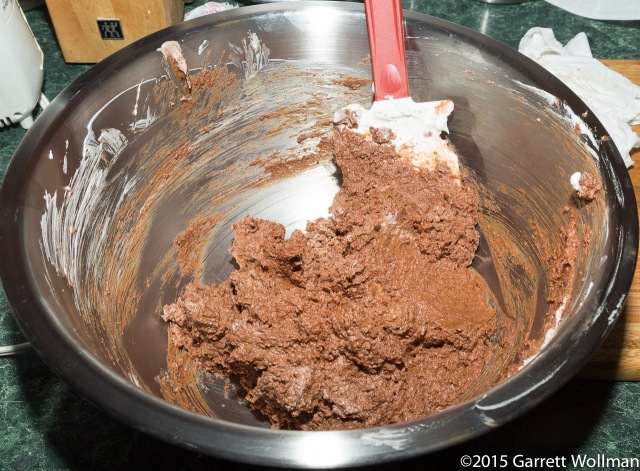 The usual process of combining an egg foam with a heavier batter (soufflé base, custard, etc.) is followed in this recipe: first mix in a third of the meringue to “lighten up” the main batter, then fold in the rest taking care to deflate the foam as little as possible. 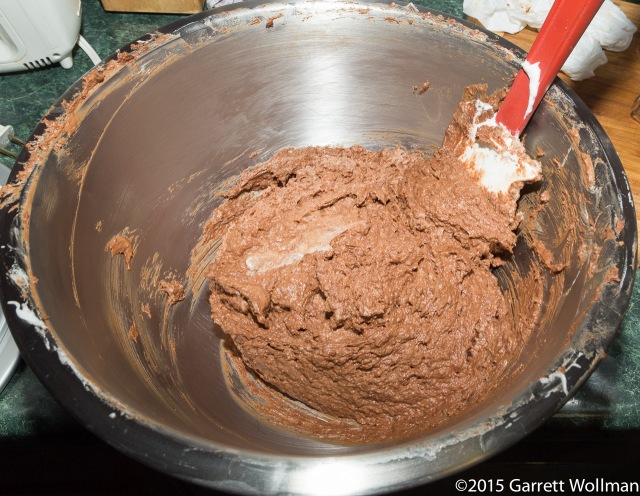 After folding in all the meringue, the cake batter looks like this. It’s still pretty firm, even after adding all that egg foam, but it’s at least spreadable. 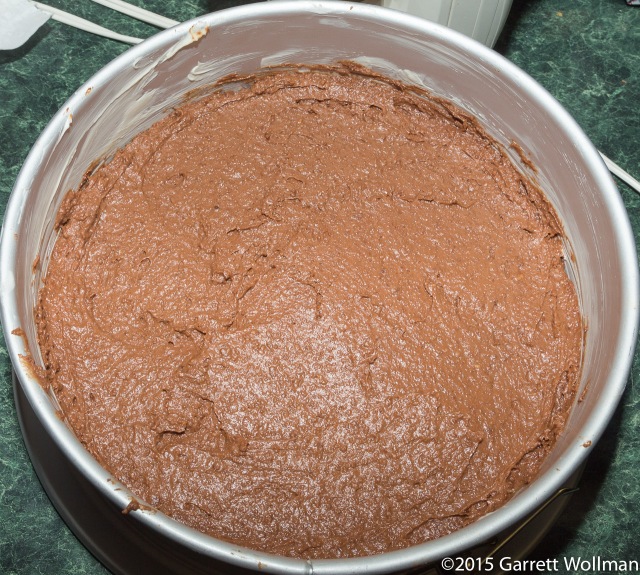 I dumped the batter into the prepared springform pan and used an offset spatula to spread it around as evenly as I could. 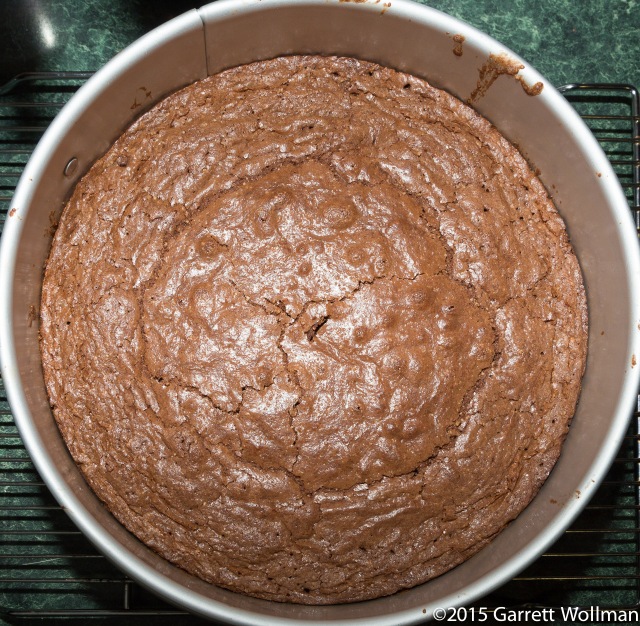 After about 50 minutes in a 325°F (160°C) oven, it comes out looking not all that much different from how it looked going in. It needs to sit for a few hours before being extracted from the springform pan and portioned. 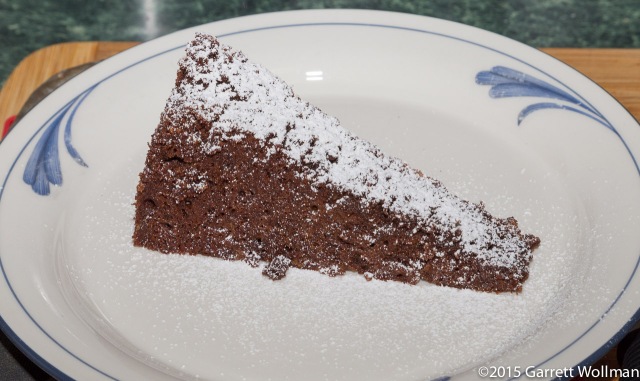 Costantino suggests serving either with powdered sugar, as here, or with a dollop of whipped cream. Since I happen to have a cup of whipped cream left over from yesterday’s quiche, I’ll be bringing that into work to garnish the cake. I found the cake to be amazingly buttery — as befits a cake with half a pound of butter in it — but to be somewhat lacking in the chocolate department; if I were to make this recipe again, I’d be aiming for the high end of the cacao range suggested in the recipe. It’s possible that a small addition of espresso powder would have brought out enough bitterness as well, although there’s not a lot of water in this cake outside of the meringue in which it could be dissolved. I could easily imagine splitting the cake in half and filling it with whipped cream (or frangipane) — then more whipped cream on the outside and additional ground (or sliced) almonds to make for a very restauranty (and super-high-cal) presentation. 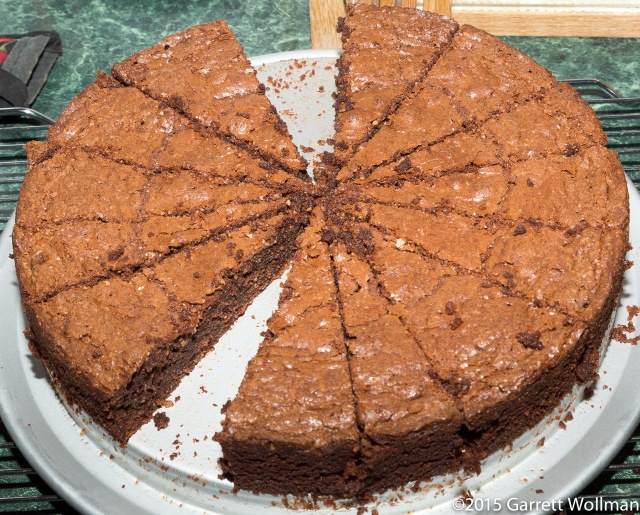 There’s no escaping the fact that this cake has a half-pound of butter and five eggs. It’s not going to be the sort of thing you can gobble (at least not and remain friends with your doctor). Twelve per cake is really the largest reasonable serving size.