I’m not a fan of a lot of vegetarian fare: all too often the major flavors, especially the protein sources, are things I don’t care to eat. That goes doubly for vegan food, since without eggs and dairy many of the best flavors and textures are off limits. But every so often, someone manages to make the one perfect recipe — and you don’t notice that it doesn’t actually have any meat in it. Or maybe you do notice, but it’s so good you don’t actually mind. This is one of those recipes.

Lan Lam wrote up the recipe in Cook’s Illustrated, called “The Best Vegetarian Chili” ($), and it was published in the November/December 2012 issue; it was also presented on the PBS series America’s Test Kitchen (episode 1324 “Chili and Stew Go Vegetarian“, first aired in 2013). Most vegetarian chilis I’ve tried have been weak, watery concoctions, little more than a cumin-flavored bean soup, but for this one, Lan Lam pulled out all of the Test Kitchen’s usual tricks, then added some more that were developed specifically to give this recipe a texture that would satisfy even meat-lovers like me. I’m not quite prepared to give up my chile con carne or green chile and pork stew, but this comes closer than anything else I’ve ever tried.

One of those tricks that the Test Kitchen cooks often use is adding mushrooms. Usually I would find this totally unacceptable, but in this case, the only mushroom used is dried shiitake, which is ground up into a powder rather than presenting as the usual slimy little morsels of disgustingness, so I was willing to at least give it a shot. The overall proportions meant that the mushroom powder wasn’t going to contribute a lot of mushroom flavor — only half an ounce, as compared to a pound of beans, two pounds of onions, and 30 ounces of tomatoes — so it seemed unlikely that I would even notice it, and indeed I didn’t notice it at all. The other tricks that regular readers or viewers would be familiar with are there, too: brining (in this case, a hot speed-soak for the beans to infuse them with Na+ ions, altering the way their texture changes as they cook); soy sauce and tomato paste (both add lots of free glutamate to trigger umami taste receptors); cooking stews under low, gentle heat in the oven to prevent burning; and blooming spices in hot oil. Both ground walnuts and bulgur are used to adjust the texture; walnuts also add more glutamate and the bulgur acts as a thickener, releasing starch into the liquid. There is an additional trick I’ve never seen before as a part of the finish (I’ll mention it at the end; you’ll have to watch the video or read the recipe to get the full explanation).

There are a lot of ingredients in this chili, and I haven’t managed to get them all into this photo, although you can see many of them. Not shown here: water, soy sauce, vegetable oil, cumin, garlic, fresh jalapenos, and fresh cilantro. Only two of each type of dried chile are used, and if I were to make one change, it might be to up the heat by adding more (or a different kind of) chiles. The recipe calls for dried anchos, which are readily available, but also for “New Mexican” chiles, which are not, although the Test Kitchen uses them frequently. I substituted pasilla negro chiles, which were on the same rack of dried chiles as the anchos, but I wouldn’t mind knowing where the staff get these “New Mexican” peppers, or what other name they go under that I might be able to find in the supermarket. (Given that I and the Test Kitchen are both located in the same metropolitan area, you’d think we’d have the same stuff in our supermarkets!)

I used a combination of equal parts pinto and cannellini beans, as suggested in the recipe’s headnote. After a quick inspection and rinse, the beans are brought to a boil in four quarts of brine, then allowed to steep off-heat for an hour.

After soaking, the beans have more than doubled in size with absorbed water, but are nowhere near cooked yet. 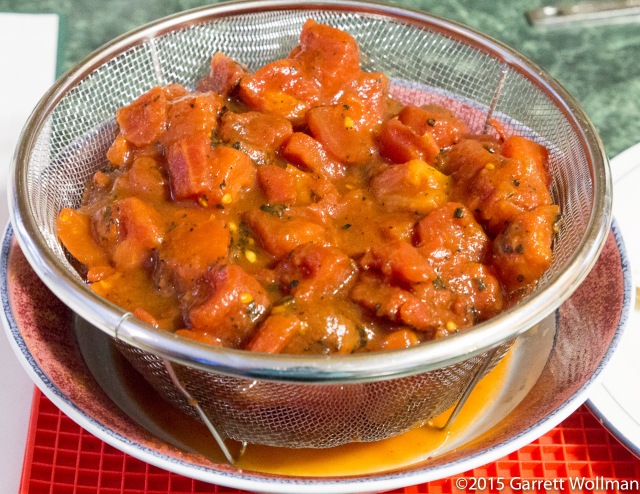 In parallel with the beans soaking, several additional preparation steps are completed: the walnuts and the dried chiles are toasted; the onions are peeled and roughly chopped; the dried chiles are stemmed, seeded, and broken into small pieces; the jalapenos are stemmed and chopped; the garlic is peeled; the dried shiitake is also broken into small pieces; and (shown here) a 28-ounce can of diced tomatoes (I used Muir Glen “fire roasted” tomatoes) is separated into pulp and juice components, both of which are used in the chili.

The crumbled dried shiitake was combined with four teaspoons of dried oregano and ground up in the spice grinder.

The stemmed and seeded dried chiles were also ground up and added to the oregano-mushroom mixture. Not shown here: cumin, which I always grind fresh from the fruit. (All of these ingredients are added at the same time so they can be mixed together in the grinder as convenience dictates.) 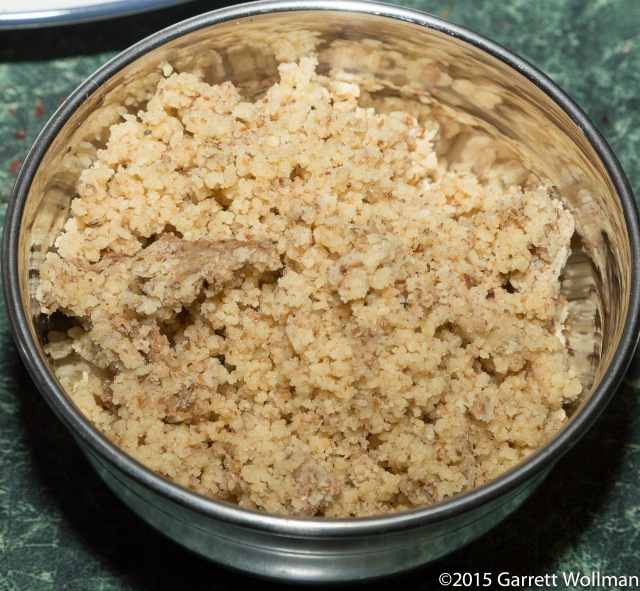 The toasted walnuts are then ground up in the food processor.

The recipe calls for two pounds of onion, “finely chopped”. I said “screw that” and roughly chopped the onions and let the food processor do the rest of the work. (I’m not sure why they didn’t just say that in the recipe — it’s not like anyone likes mincing onions by hand!) I actually started with a bit more than two pounds, knowing that peeling and trimming was likely to lose all of the excess and then some. (And since the alternative is solving the Knapsack Problem with a bag of onions…)

The onions are mixed with salt and sweated in a quarter cup of vegetable oil (I used peanut oil, because it was what I had already open) for several minutes. 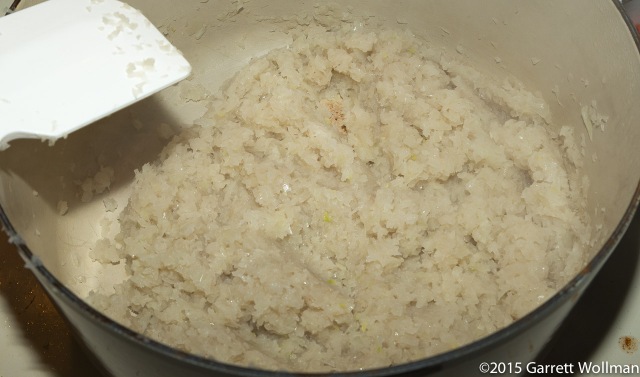 The recipe says 8–10 minutes to cook the onions, but I gave up after 12 when they still hadn’t gotten noticeably browned. Perhaps my notion of “medium high” doesn’t match Lan Lam’s. 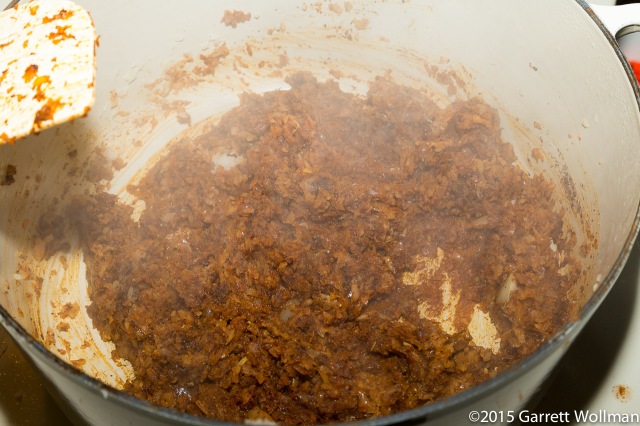 All of the ground spices — mushrooms, oregano, dried chiles, cumin — are mixed with the onions and allowed to “bloom” in the oil for a minute or so. (The recipe says “until fragrant”, but that doesn’t do much for me: the spices were already fragrant when they went in!) This is one of the Test Kitchen’s favorite tricks, and should also be well known to anyone who cooks pretty much any Asian cuisine. Many of the flavor compounds in the spices are in fact hydrophobic, and oil soluble, so “blooming” the spices helps their flavors spread evenly throughout the dish and coat the mouth when eaten.

The reconstituted beans, having been rinsed, are added back into the Dutch oven and mixed with the onions and spices.

Water, rather than broth, is then added, and the whole thing is brought to a boil and then goes into the oven for the first stage of simmering.

Remember that drained can of diced tomato? It went into the food processor along with six cloves of garlic, two jalapeños, and three tablespoons each of tomato paste and soy sauce.

After the first simmer stage in the oven, the tomato-garlic-chile mixture, the reserved tomato liquids, the ground walnuts, and two-thirds cup of bulgur are all stirred into the stew, and the whole thing then goes back into the oven for two more hours of cooking. 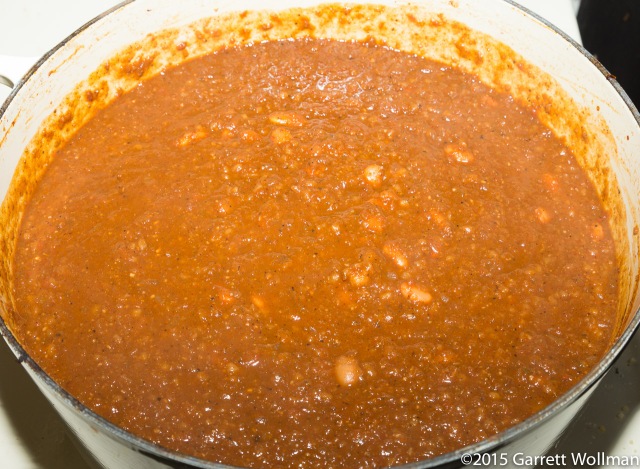 OK, we’ve now been cooking for five hours. Is the chili done yet? Nope! After taking it out of the oven, it is stirred vigorously to emulsify any remaining vegetable oil, and then left to stand for 20 minutes before stirring in the final ingredient, chopped cilantro. (Because cumin and coriander are best buds! Sorry, supertasters.) 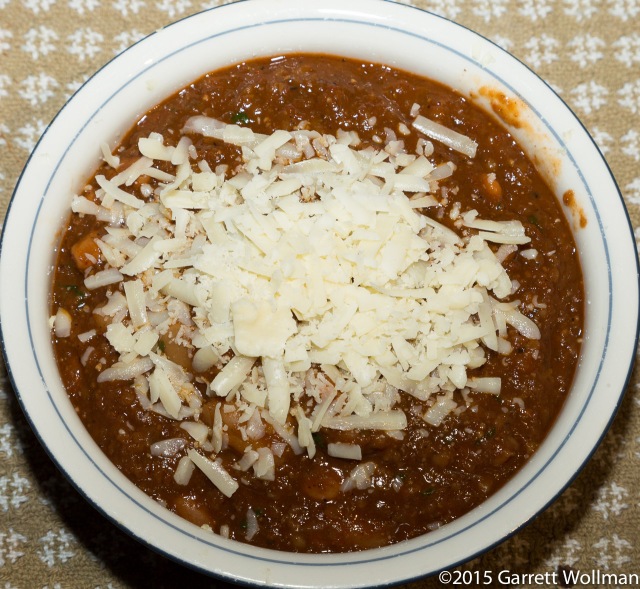 So I chose not to make it vegan — I like cheese, OK? But you could easily add non-animal toppings, like chopped avocado, minced red onion, or lime juice, if you prefer. I wouldn’t mind a nice dollop of sour cream here, but that’s not really compatible with my diet so I decided not to indulge; a half-ounce of shredded cheddar was perfect.

I had a great deal of difficulty with the nutrition database getting correct numbers for all of these ingredients, but I’m reasonably comfortable with what I’ve shown here. When I made it, this recipe yielded 8½ lb of chili, for a serving size of 17 oz given the recipe’s suggested yield of “6–8” servings. For a lunch serving, or if you like adding lots of toppings, a serving size of about half that, say 8–10 oz, is probably reasonable. I’ve used canola oil for the computation rather than the peanut oil I actually made it with. The sodium amount is uncertain since I don’t know how much the beans actually absorb during the brining process.

This entry was posted in Food and tagged America's Test Kitchen, chili, Cook's Illustrated, recipe, vegetarian. Bookmark the permalink.
%d bloggers like this: