Continuing my exploration of King Arthur Flour’s Whole Grain Baking, last weekend I made a coffee cake (specifically what in New York would be called a “crumb cake”), which uses whole-wheat flour for both the cake itself and the “crumb” topping. The recipe appears on page 65 of the book. Both phases also require some white flour for structure, but the majority of the wheat by mass is whole wheat — graham flour (or “whole-wheat pastry flour” in modern marketing) for the crumbs, and traditional hard red whole-wheat flour in the cake. Here’s how I made it.

We start with the ingredients for the “crumbs”. In addition to the graham flour (which is milled from soft wheat, the same as is used for pastry flour), there is some regular all-purpose flour, a lot of sugar, and a lot of melted butter. Additional flavoring comes from cinnamon (half a tablespoon) and both vanilla and almond extracts.

All the dry ingredients for the “crumbs” were passed through a sieve, either while being weighed or after, and then whisked together in a large bowl.

I have two sieves that I commonly use for removing lumps from dry ingredients like sugar and flour. You’ll notice that one of them, which is newer and in much better shape, is also finer — I found when sifting the graham flour that much of the wheat bran in the flour would not pass through this sieve, and would have been lost had I not shifted over to the old, wide-hole strainer. (A lesson to keep in mind for next time!)

Here’s a close-up of the newer sieve, showing how even sugar crystals get caught in the mesh. This is not a problem for starch, white flour or powdered sugar, and it’s great for custards or washing berries, but it’s a real problem for sifting sugar or whole-grain flours. The other strainer still catches some big clumps of sugar crystals but doesn’t separate the flour.

After the dry ingredients were mixed together, I melted the butter in the microwave and let it cool down for a minute or two before whisking in the vanilla and almond extracts. This flavored, melted butter was then simply dumped on top of the dry ingredients and the resulting mess was stirred until everything was thoroughly moistened and these lumps formed. (My colleague Sue Felshin noted how, even though most of us would balk at eating melted butter, flour, or sugar alone, all of a sudden when you combine them it becomes delicious — which I can confirm, as I was snacking on these “crumbs” for the whole rest of the day! You see it with cookie and cake batters made by the creaming method as well: we won’t eat solid fat or pure sugar, but creamed butter-and-sugar is yummy, then it becomes disgusting when we add raw eggs, but it’s suddenly edible again after blending in the flour as it becomes a proper dough or batter, even before baking.) This mixture bears a lot in common with a standard streusel topping, as used on a pie or crisp; I’m not sure why it’s referred to as “crumb topping” — unless maybe an earlier version was made with bread crumbs rather than flour?

Now it’s another mise en place, this time for the cake phase of the production. The cake in this case is a butter cake, made by the creaming method, but leavened by a combination of sour cream and baking soda. (Some butter cakes are leavened by the creaming action alone, but more commonly baking powder is used to provide sufficient lift.) You’ll note that this time I measured the sugar by volume, as that was more convenient — since granulated sugar doesn’t vary much in density the way flour does, or indeed the way brown and powdered sugars do, this is usually OK.

At this point I’ve creamed the butter and the sugar, and mixed in the eggs, vanilla, and sour cream, but haven’t added the dry ingredients yet.

My cake ingredients were a bit on the cold side when I started — I keep my whole-wheat flour in the freezer, and dairy in the refrigerator, but didn’t want to wait quite so long to complete the cake to let them come properly to room temperature — so the batter was quite stiff, almost more of a dough than a batter. This made it very difficult to spread it out in the non-stick pan, which was already coated with baking spray in addition to the non-stick coating. I tried using an offset spatula, but eventually gave up and ended up just using wet fingers to press it out evenly. (The problem with the spatula was that the batter would stick more strongly to the spatula than to the bottom of the lubricated pan. It may not have needed the baking spray, anyway; this pan is supposed to be a good one for cakes and I should really try doing this without extra lubrication as an experiment.) 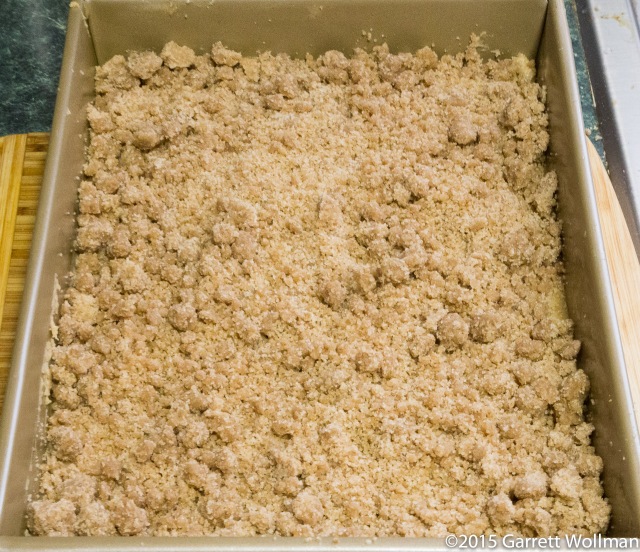 Finally, the cake batter being about as even as I could get it, I spread the “crumbs” on top, again in a reasonably even layer. Because the mixture had been sitting for a while, the butter had a chance to resolidify, and I needed to get my hands in and break up some of the bigger lumps of “crumbs” before baking. 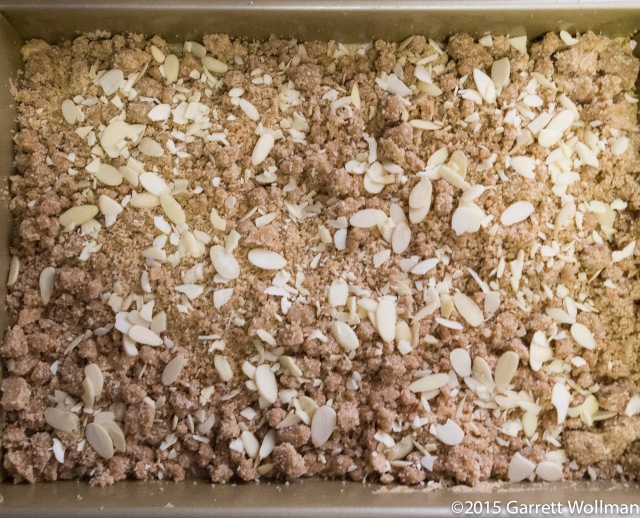 Because the crumbs were made with almond extract, I took a cue from commercial bakeries and added sliced almonds on top as a visible warning. Whenever you bake something containing a known but not necessarily expected allergen like nuts that you intend to feed to people other than your immediate family, it’s considerate to use such an indicator so that people with those allergies will be adequately warned. (I don’t know that almond extract can actually trigger an almond allergy, but having colleagues with various nut allergies I did not care to take the chance.) 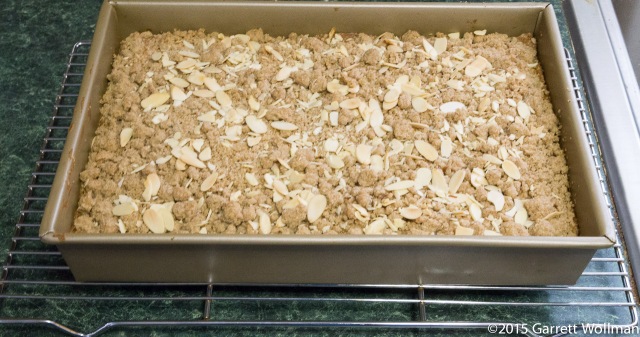 The cake ended up somewhat overbaked, and a bit drier than I would have preferred, because I was stuck in the bathroom when the timer went off, but it was still eminently edible. You’ll note that the sliced almonds have acquired a toasted color, although they don’t contribute much to the flavor of the cake. 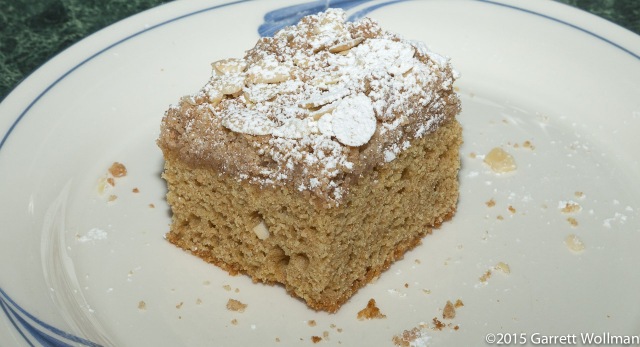 I sliced the cake into 24 individual servings, approximately two inches on a side. I ended up eating four servings myself, spread over two days — not counting the “crumbs” I was snacking on — and gave the rest away at work. Everyone liked it, although a couple of people noticed, as I had, that it was a bit drier than desirable. In other circumstances, I might have cut the slices larger, but knowing that I was going to give away almost all of the cake I decided that there was little percentage in making big pieces — if the servings had been any larger, then more people would have cut them in half. (It does irrationally irritate me that no matter how small I make a serving of something I’ve baked, there will always be at least one person who wants to cut it in half!) You’ll note, though, that the application of the optional powdered sugar does have a negative effect on my “visible warning” strategy with the sliced almonds.

As these things go, despite the very large quantity of sugar, the nutrition is not horrible. Of course, the use of whole-wheat flour adds some fiber. This calculation includes a quarter cup of sliced almonds, as noted above, which were not in the original recipe.