I wasn’t so pleased with the first couple of recipes I tried from Deborah Krasner’s Good Meat: The Complete Guide to Sourcing and Cooking Sustainable Meat, although some of the issues were probably my fault. I’m pleased to report that there were no such issues with her “Glazed All-Beef Meat Loaf” (p. 61). The recipe was easy to follow, completely specified, and resulted in a tasty, finely textured meatloaf. I forgot that M.F. Dulock closed early on Saturdays, so I ended up getting my grass-fed ground beef from my local Whole Foods, which gets it from Rain Crow Ranch in Missouri. (I would rather have gotten a more local product, but this is still pretty good and the markup isn’t very much compared to the regular grain-fed beef. And speaking of that, why can’t Whole Foods get with the program and just stop selling grain-fed beef? They managed to stop selling unsustainably harvested fish without taking much of a hit, and on the list of bad animal-product-production practices, grain-fed beef is one of the absolute worst.)

As usual, we start with the mise en place. As meatloaf recipes go, this is a simple one that really lets the flavor of the beef shine through; in addition to the meat, there are just a few aromatic vegetables (onion, garlic, and carrot) and a few herbs (parsley, thyme, and marjoram), plus rolled oats and an egg as a binder. The glaze is equally simple, with mustard, honey, soy sauce, and ketchup. 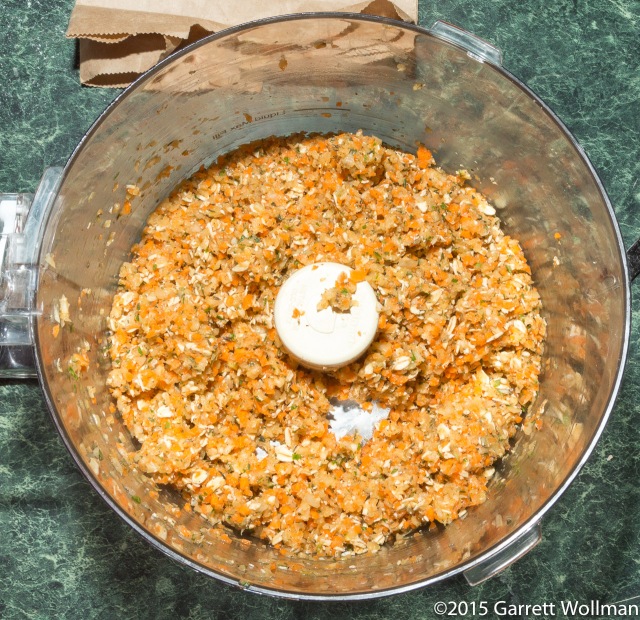 A really smart idea in this recipe which I don’t see very often is to chop up all of the plant ingredients to a uniform size in the food processor. This contributes to a finer texture in the final meatloaf without requiring the assistance of an army of prep cooks to mince the vegetation by hand. (An alternative method might be to use a box grater.)

The vegetables, meat, and binder are all mixed together and then packed into a greased 9×5 loaf pan, which serves only as a mold, not a cooking vessel. After turning the loaf out onto a sheet pan, as shown above, the glaze is poured on top (I used a knife to spread it evenly) and the loaf is baked at 425°F (220°C) for half an hour to set the crust. The loaf continues baking at 325°F (160°C) until fully done (checking with an instant-read thermometer), and then comes out of the oven to cool for ten minutes or so.

The recipe says to slice into ¾-inch thick slices; I’m not much good at dividing things into twelfths, so I made eight 1¼-inch thick slices instead, making two slices rather than three or four the standard serving size. The stated yield is “4 to 6”, so I don’t feel like I’m deviating too much, and for my meal planning, 6 meals would be two weeks (with half of the food in the freezer, so probably not consecutive weeks). 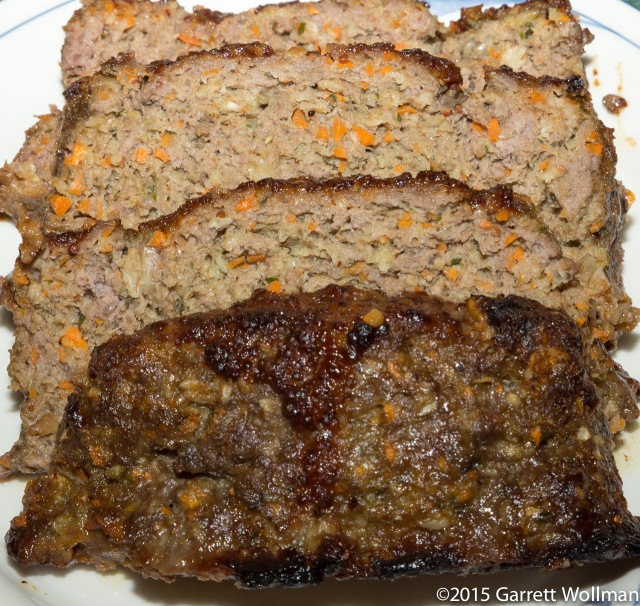 But then after eating the first meal, I decided that it might be nicer to have thinner slices, so I cut each of the big slices in half.

As I mentioned, this is based on getting four servings out of a 9×5 loaf. Your mileage may vary. Note that a lot of fat runs out of this loaf while it’s cooking (I used 85% ground beef as the reference), so the actual calorie, fat, and cholesterol values are smaller than stated here.

This entry was posted in Food and tagged Deborah Krasner, meat loaf, recipe. Bookmark the permalink.
%d bloggers like this: