Originally this weekend, I figured I would make brownies. But then I got the idea for a brownie-fest and decided to do something different. I stumbled across the recipe for “The Queen of Sheba”, a chocolate-almond torte, in Alice Medrich’s Seriously Bitter Sweet (Artisan, 2013; p. 80) while looking at her brownie recipes in the previous chapter. This is originally a French dish (La Reine du Saba), but Medrich has over the years adjusted the ingredients and process to make it her own. It’s assembled by the soufflé method, and looks like nothing so much as a fallen chocolate soufflé. (Indeed, one of the variations on this recipe is “Fallen Chocolate Soufflé Cake”, p. 82, which I intend to do in the future — it’s even lighter than this one, leaving out all the butter and half of the egg yolks.)

The mise en place is fairly standard for a chocolate soufflé: four eggs (separated), a very small amount of flour, cream of tartar to help whip the egg whites, a bit of sugar, and the flavoring ingredients — in this case, almonds, almond extract, chocolate, and brandy (three whole tablespoons of it, nearly half of the tiny little bottle at left).

The first step is to prepare the pan. No, scratch that — the first step is to go buy an 8×3 (205×75 mm) springform pan, and then bring it home, remove the label, and wash it. The second step is to prepare the pan, which in this case means simply putting an 8-inch round of parchment in the bottom. I used a little baking spray on the bottom to help the parchment stick, but found when I closed up the springform ring that the makers of my pan and the makers of my parchment sheets had something of a disagreement about how big “eight inches” actually was. (Perhaps the pan is actually 200×75 mm? I didn’t measure it myself.) 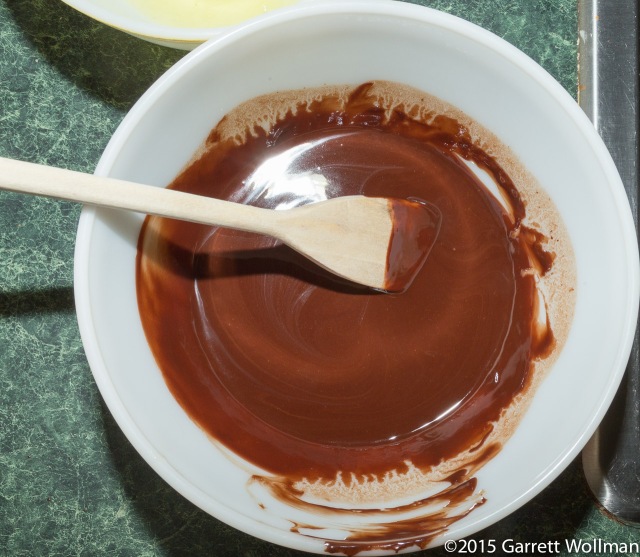 Next, the butter (unsalted, of course) and chocolate (this time I used Guittard organic 66% baking discs) are melted together in the microwave. (If you’re paying close attention you’ll notice that I switched bowls here — that Pyrex bowl was holding the egg yolks before!) After stirring them together, the salt, brandy, and almond extract are mixed in and the whole thing is set aside for a while to cool. (This photo shows the chocolate mixture before adding the alcohol, but it makes no difference to the appearance.)

The flour (15 g) and natural (unblanched) almonds (70 g) are ground together in a food processor. I probably stopped a bit too early; Medrich says “until the mixture has the texture of cornmeal”, but somehow in my mind that became “coarse meal” — thankfully this is a very forgiving recipe. 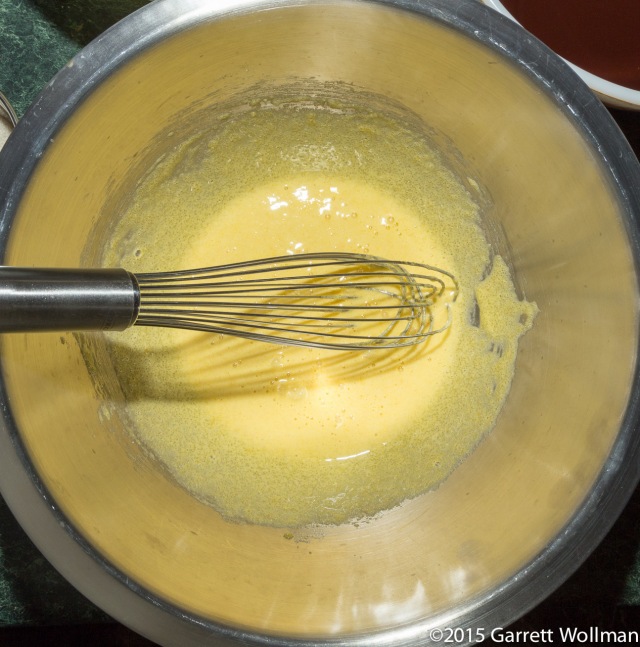 The egg yolks are whisked together with 100 g of sugar. The sugar provides sweetness, obviously, but also helps protect the egg yolk from the still-warm chocolate mixture that’s about to be added.

In soufflé terms, this is the “sauce” or “base” of the soufflé: in a chocolate soufflé, the base is a chocolate sauce, enriched with egg yolks, and that’s exactly what we have here. In the second part of the soufflé method, we’ll make a meringue (whipped egg whites, in this case sweetened with an additional 50 g of sugar), and then put the two together and bake. 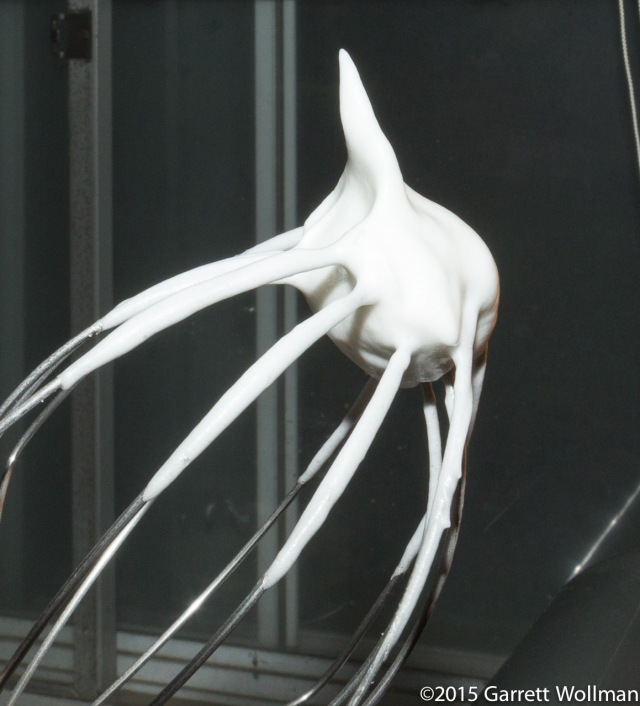 The meringue should form “stiff but not dry” peaks. I’ve never understood what “dry” meant in this case; hopefully that means I’ve never screwed up a meringue! Cream of tartar (sodium tartrate or tartaric acid) is added early on in the whipping process to make it easier to form and build a foam; later on in the whipping process, sugar is incorporated. (Because sugar is hygroscopic, adding it at the beginning would make the meringue grainy by pulling water away from the egg protein; once the foam has formed, this is no longer an issue.)

The batter comes together quickly now: all of the nuts and flour are folded in to the chocolate base along with a third of the meringue, which really serves only to lighten the base sufficiently to allow the rest of the egg foam to be incorporated. The folding technique is used to deflate as few of the air bubbles in the meringue as possible, since these will provide all of the leavening in the finished torte.

After folding in all of the egg white foam, the mixture is poured into the prepared 8×3 springform, and comes about two inches up the sides of the pan (which is why a normal 8×2 cake pan can’t be used for this recipe).

After baking for 30 minutes at 375°F (190°C), the torte is fully cooked and almost dry around the outside, but still soft and wet on the inside. As you can see, it has climbed the sides of the springform pan all the way to the top — but it will sink rapidly in the middle as it cools, since the egg proteins in the center are not sufficiently set to hold up their own weight, just like a soufflé.

After completely cooling and depanning, the torte looks like a fallen soufflé, which after all this buildup should not come as a surprise. Medrich relates how, early on in her baking career, it was normal to level this torte, flip it upside-down, and cover it completely with a chocolate glaze — but she no longer does this, and I didn’t consider it necessary either.

The headnote for this recipe says it serves 12 to 14. I’d have a real challenge cutting it into 14 slices, and in all honesty, had a real challenge eating just a twelfth! (To be totally honest, I had two slices!) This photo shows the torte partially portioned for twelve, with one slice removed, but if my diet allowed, I’d just have a quarter — it’s deceptively light.

Since I knew that I was going to be keeping the torte for a few days, I didn’t cover the entire top with powdered sugar, electing instead to sift a little bit on top of my slice instead. Yum! You’ll probably have a hard time eating only one twelfth of this torte, too.