After a week of baking (on my part, not so much the other bakers’), we finally held Browniefest on Monday, June 15. I brought 14 batches of brownies to the office on Sunday: 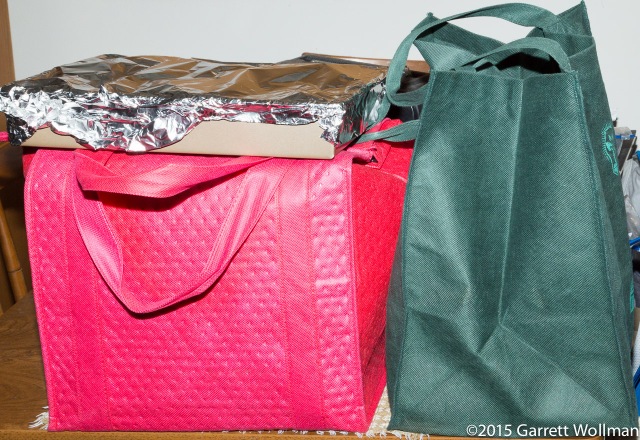 …but the final batch, Emily Luchetti’s “Black Forest Brownies”, were highly perishable and had to wait until Monday morning for the finishing touches to be applied. More about that recipe later. I also brought all my leftover cream on Monday, and whipped it up as I usually do when I have leftover cream. I took all of the brownies out of the office fridge and let them come up to room temperature on our meeting table before putting them on cheap plastic plates for service and weighing. (I weighed them to come up with an average serving size for the nutritional information which will accompany this series of posts.)

Because it was raining, we had to told the event indoors. I set out three tables of brownies, and there was a fourth table with ice cream as well as my bowl of whipped cream. 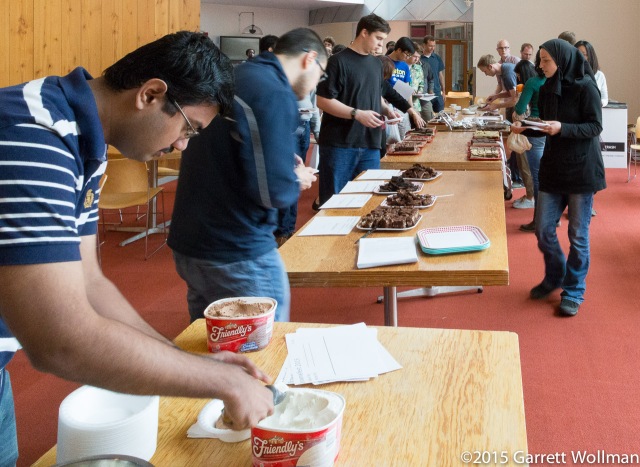 We started service at 12:30; I personally skipped lunch (and dinner, for that matter) knowing that I would eat far too much, although I had no ice cream. A few of the bakers were late to the party and did not have their brownies sampled by as many of the participants; a few others had to bail at the last minute (but that was OK, we had plenty). I tried to get people to fill out evaluation forms that I had printed up for the event, but only a small fraction actually bothered to do so. (Perhaps if I had been standing at the head of the line handing them out it would have made a difference — I had intended to buy a bunch of golf pencils but forgot to look for them when I was buying the plates at Target.)

I felt (and still feel) fairly strongly that recipes ought to be tasted in something closely approximating their intended serving size, and if that means you end up eating larger portions of fewer items, then so be it — but some people felt otherwise and quickly began chopping up my brownies into tiny pieces. Most of the other bakers also supplied their brownies in much smaller than usual pieces.

On the anonymous evaluation form, I asked participants to identify their preferred style of brownie. The responses were as follows: