The two recipes I made from Alice Medrich’s Seriously Bitter Sweet (Artisan, 2013) were “Best Cocoa Brownies” (p. 69) and “New Classic Chocolate Brownies” (p. 67). They were so similar that I didn’t even bother to take pictures of the “New Classic” variety, although that recipes does in fact have one of the odder procedures — it just wasn’t particularly photogenic. So the photos below are for the “Best Cocoa” version; I’ll discuss the differences between the two. (Medrich also supplies five other variants of “New Classic” that I did not try; these might be interesting for a smaller tasting just to see what the effect is.)

Medrich says that the recipe works with either natural or Dutch-process cocoa powder; I used TCHO natural cocoa powder. I included the optional nuts (walnuts), because that’s what I like. “New Classic” uses unsweetened chocolate (TCHO 99% dark chocolate critters) rather than cocoa for flavoring, and reduces the butter to keep the fat roughly constant; other proportions are the same. I also used walnuts in that recipe, so it was possible to do a side-by-side comparison. Both recipes are unleavened. 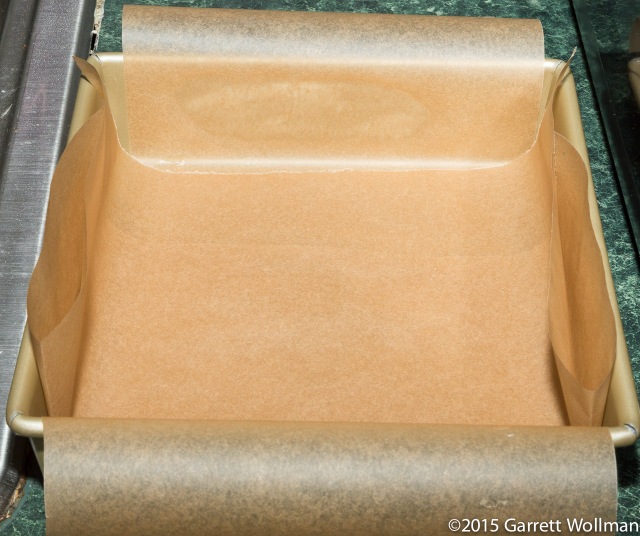 Both recipes are prepared in an 8×8 baking pan, lined with parchment or foil; I prefer parchment, and I also applied baking spray (although it was not called for) to ensure a clean release. 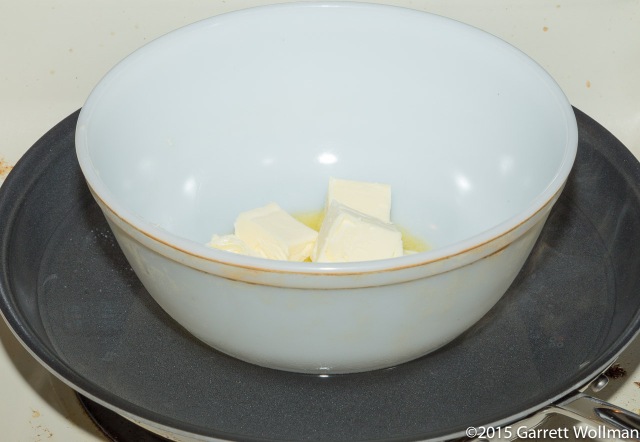 Both recipes called for an odd bain marie melting procedure, which was strange enough that I actually followed it. (For other recipes calling for melting butter and/or chocolate in a double boiler, I used the microwave instead, which is just as good and uses much less time and energy.) 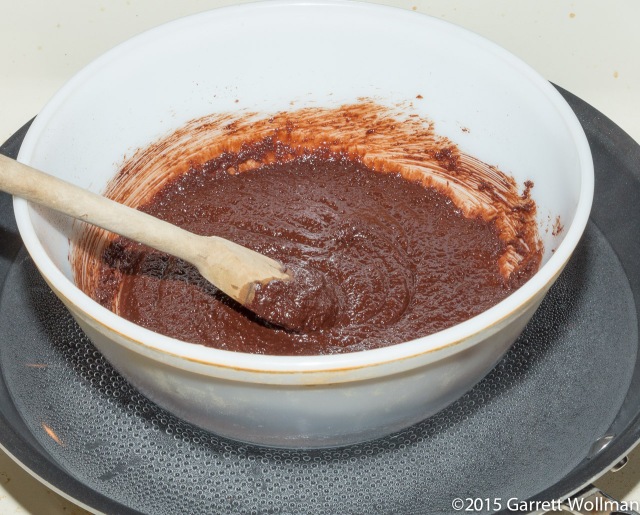 The sugar, cocoa, and salt for “Best Cocoa Brownies” are added with the bowl still on the heat; the procedure is otherwise identical to my “Procedure #1” as described in my “Techniques and Ingredients” post. For “New Classic”, the instructions depart from the normal procedure after the flour is added; Medrich writes, “beat with a wooden spoon or a rubber spatula until the batter forms a cohesive mass and comes away from the sides of the bowl … don’t stop stirring until it does.” I gave it about three minutes, and decided that was enough, in spite of the fact that the batter never “came away from the sides of the bowl” as I would understand it. Usually, brownies are treated like cakes in that gluten development is something devoutly to be avoided; “New Classic” is unusual in that Medrich seems to be desiring a great deal of gluten development. (I could always add more gluten, in any number of ways, if that’s really what’s needed — but I use King Arthur flour anyway, which has higher protein even in “all purpose” than most other brands.)

“New Classic” departs from the usual procedure in a second way as well, which I neglected to capture: they are baked at a very high temperature, for a shorter than usual time, and then cooled in an ice bath — or at least as much of an ice bath as I can make, with only a single ice-cube tray to my name and no room in the freezer to store ice. The folks at the Test Kitchen poo-poohed this procedure, and I certainly can’t claim from my experience that it did anything useful at all. Medrich provides “Classic” variants that use a more normal procedure; I suspect I’d have to do A/B/X testing to know if it really makes a difference (and if so, whether that difference is one that I actually desire). 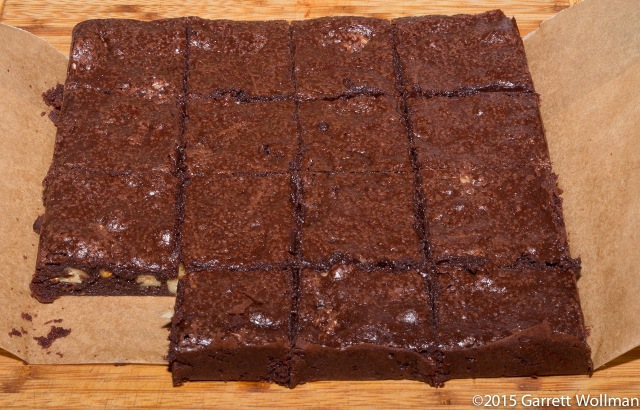 After cooling, both recipes were depanned and cut into 16 2×2-inch squares, the suggested serving size.

I ate one serving of each brownie — luckily the weather was sunny so I could get out on my bike and work off those calories — soon after they were prepared and finished cooling, before bagging and freezing them. Since these two recipes were completed first, they also spent the longest time in storage before being brought out for Browniefest.

The results may have been influenced by the fact that they were the very first batch most tasters encountered, but “Best Cocoa Brownies” were by a large margin the panel’s favorite recipe, with 4 out of 13 “favorite” selections, a first-place overall rating of 4.6 (n=5), and first-place or tied-for-first rankings in “chocolate flavor”, “chewiness”, and “moistness/mouth feel” categories. “New Classic Chocolate Brownies” came in tenth overall with a 3.4 score (n=4), despite getting one “favorite” selection.

These two recipes don’t differ that much in nutrition, being nearly identical in serving size, calories, and macronutrients. Both are “A Low Sodium Food” under FDA regulations, having less than 140 mg Na+ per 40 g.

This entry was posted in Food and tagged browniefest, brownies, chocolate, recipe. Bookmark the permalink.
%d bloggers like this: