I made two different recipes from Agatha Kulaga and Erin Patinkin’s Ovenly (Harlequin, 2014): “Salty Super Dark Chocolate Brownies” and “Cinnamon & Ancho Chile Brownies”. While I’ve had my complaints about this cookbook before, both of these recipes turned out as advertised, with no hitches during preparation. Although the “Salty Super Dark” recipe is actually the second one in the book, I made it first, figuring it would give me a better handle on how the authors’ brownies come together.

The unique feature of these brownies is the enormous amount of cocoa powder they contain: an entire cup of natural (the authors call it “American-style”) cocoa powder, which I measured at 95 g, plus a quarter-cup of Dutch-process cocoa. (They actually recommend a specific Dutch-process cocoa from Guittard, as well as a specific trendy Brooklyn espresso powder, neither of which I had, so I used the same Valrhona cocoa and Spice House espresso powder as I used in other recipes.) There’s three quarters of a teaspoon of salt in the batter, in addition to the Maldon flake sea salt sprinkled on top, and nearly equal amounts of granulated and dark brown sugars (again, I used India Tree dark muscovado).

The construction for this recipe follows a variant of “Procedure 2” as described in part 2 of this series; in this case, the cocoa is considered a “dry” ingredient, and blended with the flour, rather than being blended with the butter; it might be worth experimenting to see if doing it the other way around would enhance the chocolate flavor.

These brownies definitely are dark, and I’m willing to bet that if I had used a darker cocoa (Guittard, I believe, makes a natural cocoa that’s much darker in color, but I chose to buy the TCHO instead) they would have been darker still. This recipe specifies a 13×9 baking pan, but unlike all the other recipes in this size, the suggested serving size gives 15 portions per batch. I was going to cut it in 24, like all the others, but when I did the nutrition calculations, I found that 15 per was actually a reasonable serving size, comparable to brownies baked in 8×8 pans, like the next recipe. 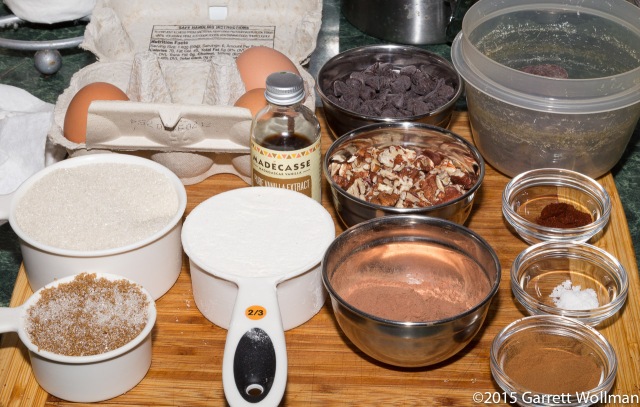 Kulaga and Patinkin’s “Cinnamon & Ancho Chile Brownies” use a combination of natural cocoa powder and dark (not unsweetened) chocolate for their chocolate flavor — and of course they also have cinnamon and powdered chile for an extra spicy kick. They recommend using at least 60% cacao chocolate; I used TCHO 66% baking discs for this recipe, and in the future would consider bumping it up even more, although I suspect it would also go nicely with Valrhona Manjari 64%. This recipe uses three eggs, as compared with other recipes that call for either two (for 8×8 pans) or four (for 13×9 pans); the flour amount is increased to two thirds of a cup to compensate. The recipe suggests adding nuts and/or chocolate chips to this recipe, which I had planned to do but then forgot to include. A dusting of confectioner’s sugar is also suggested, but as this does not freeze well I omitted it.

As you can see, these are clearly less dark than the “Super Dark” brownies but still quite acceptable.

The “Cinnamon & Ancho Chile Brownies” were a surprise for many of the tasters, who had expected not to like them but came away making comments like “my new favorite”. Overall they scored quite well, 4.1 on the 1–5 scale (n=5), good enough for a solid fourth place, despite receiving only one absolute “favorite” vote. These brownies also received high marks on the “chewiness” and “moistness” scales, but somewhat lower on “chocolate flavor”, perhaps because the spices masked some of the chocolate. The “Salty Super Dark Chocolate Brownies” were a disappointment: while they were evaluated by more tasters, they received consistently worse-than-average marks in all four categories, with an overall impression score of 2.7; this came as a surprise to me, because I quite liked them. (However, these were by far the saltiest of the brownies on offer, and at least some tasters were put off by that; I’m less sensitive to saltiness than many others.)

As the name suggests, these brownies are far from qualifying as “low sodium”. However, if you like your brownies broad and flat, they might be a good choice, at only 251 kcal for a much larger surface area per serving than any of the other recipes.

This recipe, however, does qualify as “A Low Sodium Food” according to FDA regulations. It’s also really really tasty; if you like spicy food as much as I do, you’ll have trouble sticking to just one serving.

This entry was posted in Food and tagged Agatha Kulaga and Erin Patinkin, browniefest, brownies, chocolate, Ovenly, recipe. Bookmark the permalink.
%d bloggers like this: