Bet you thought I had completely forgotten about the midweek baking project. Nope: just have been having trouble getting to writing about it. This week I did “Coconut, Chocolate & Brown Butter Blondies” from Agatha Kulaga and Erin Patinkin’s Ovenly (Harlequin, 2014; p. 132) and the suggested alternate version with rolled oats in place of the coconut. It went like this:

This is actually a perfect example of a recipe where doing the mise en place first does not repay the effort: after the butter is browned, it has to cool for half an hour or more, during which time there’s nothing else to do, so you might as well wait (and certainly don’t leave the oven on!). Shown here: 5 ounces (140 g) of unsalted butter, 5¼ oz (150 g) of all-purpose flour, one large egg, two teaspoons of vanilla extract, 7½ oz (215 g) of dark muscovado, 50 g of granulated sugar (underneath the muscovado), and ¼ tsp of salt. AWOL: 7½ oz of chocolate chips — a rather unfortunate quantity, given the fact that chocolate chips do not come in packages of that size, or even integer multiples of that size. I used Guittard 46% semisweet chips for the first batch, but for the second batch I had to make up with “super cookie chips” — in retrospect, these were too large in size for the texture of the dough. When making the oat version, I used 90 g of rolled oats, and in place of vanilla and granulated sugar, I used an equal quantity of vanilla sugar.

When making brown butter, the first step is to melt the butter and boil off all the water: until the water is gone, the temperature of the melted fat cannot rise high enough to cause the milk solids to brown (at about 300°F or 150°C). The boiling process causes some of the milk proteins to form a foam, which floats, never really browns, and makes it difficult to see the color of the remaining contents of the pan as the solids brown. 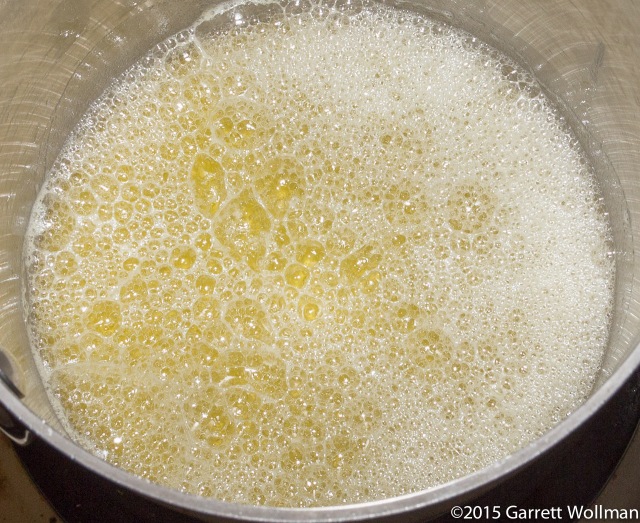 The butter is still bubbling, so it hasn’t started browning yet.

Once the butter does start browning, it goes very fast. The recipe advises stirring constantly with a wooden spoon: you still will have trouble seeing through the foam, but at least the trails left by the spoon will provide some clear windows to see the process through. Note that the butterfat itself doesn’t change color: it’s the proteins in dairy solids that turn brown, and the fat simply allows the temperature to get high enough for the browning process to take place. Ideally the browned protein will stay in small enough particles to be suspended in the melted fat.

After cooling (it took about 45 minutes), the brown butter is mixed into the sugars and combined with the egg and vanilla; then the dry ingredients are stirred in, forming a very stiff dough.

The dough is so stiff, it must be pressed into the pan for even baking. After fighting with a spatula for a minute, I gave up and used my fingers.

After baking at 350°F (175°C) for 22 minutes, the blondies look little different from how they started; one must be patient.

The second batch was made the following day, but otherwise followed the same procedure. My brown butter was a bit browner this time — the instructions say “nutty brown”, which means almost nothing to me, and of course always caution how important it is not to let the butter burn. Is this one good or bad? I have no idea; it didn’t seem to make any difference to the tasters.

You can see how the “super cookie chips” were perhaps not the best choice for this recipe (but they were close in %cacao to the smaller chips they were mixed with, which is why I used them). The center looks rather underdone, but if allowed to sit for a few hours, it’s perfectly firm and sliceable — probably overnight would be better.

The first batch, after sitting for a full twenty-four hours, looks rather more appealing, and was much easier to portion as well.

I portioned up both batches into 2×2 squares (or as close to squares as I can get, which isn’t very) and brought them into the office to share. I had one of each, but most coworkers resisted my importuning to try both and give me a comparison report. Of those who did try both, I did not find any consensus on the coconut or the oat version being preferred. I do not recall any negative comments (but my coworkers may simply be too polite — perhaps I should give my baking away to strangers instead? — to evaluate my baking honestly).

Unsurprisingly, the oat version is somewhat healthier than the coconut version.