This is the second of three promised posts to update you on my recent baking projects. As an occasional customer of King Arthur Flour’s “Baker’s Store”, they send me monthly catalogues, which I mostly just toss in the recycling bin, but from time to time they print recipes that sound interesting. Usually I give up on the recipes fairly quickly when I realize that they are just trying to sell some specialty ingredient or piece of kitchen equipment that I have no particular use for, but from time to time the recipes are actually ones I might do. I had decided not to make Emily Luchetti’s Walnut Cake with Chocolate-Orange Sabayon once I realized that it was strongly coffee-flavored, but didn’t have an alternative recipe in mind until I noticed the August issue of the catalogue on my kitchen table, folded open to a recipe for “Chocolate Chip Oatmeal Cookies” — proudly proclaiming it to be “2015 Recipe of the Year”, whatever that means. It was pretty simple, called for nothing I didn’t already have on hand, and was the sort of thing I could put my own spin on fairly easily.

The mise for this recipe is pretty simple: two sticks (225 g) of room-temperature butter, 7½ oz (210 g) light brown sugar, 3½ oz (100 g) each of rolled oats and white sugar, one large egg plus one yolk, a teaspoon each of baking powder, baking soda, and kosher salt, 18 oz (510 g) of chocolate chips, and 8½ oz (240 g) of flour. For the flour, I used 6 oz (170 g) of regular all-purpose flour and 2½ oz (70 g) of whole sprouted-wheat flour — in a dough like this it’s generally safe to substitute up to half of the white flour with whole wheat, but I didn’t want to add quite so much wheaty flavor. For chocolate chips, I use Guittard’s “Akoma Extra Semisweet” 55% cacao baking chips.

The assembly procedure is the standard creaming method, which I needn’t go into here. (If you’ve ever made any drop cookies before, you make these the same way.) I used a #30 disher to portion out the cookie dough, forming balls of 45–50 g each. The whole recipe made about 1400 g total, but I, um, ate some, so I only got 27 cookies, which worked out just fine, because at this size you can only fit nine cookies on a standard cookie sheet. (Using baker’s parchment makes clean-up a snap.) 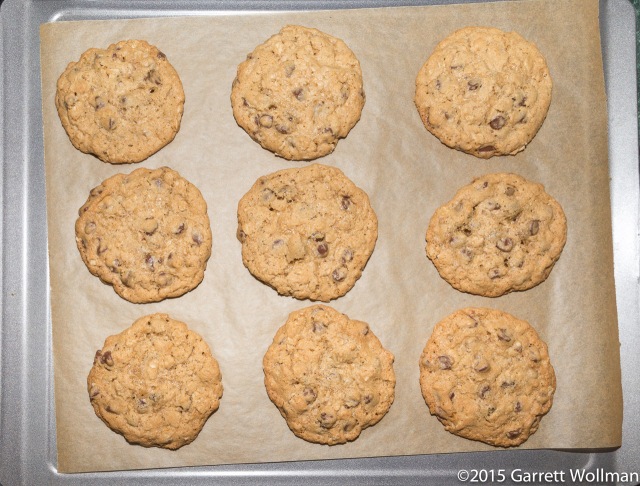 The dough balls are baked in a 325°F (160°C) oven for about 14 minutes; they are done when they start to set and brown at the very edges, but are still soft and poofy in the center. As they cool on the baking sheet, the centers will collapse, and once the starches have sufficiently set, the cookies can be transferred to a cooling rack. I would recommend baking only one sheet of cookies at a time, rather than trying to do two and shuffling them around in the oven halfway through — that way you can just keep the oven door closed until the very end.

I dirtied this plate just to take a nice picture of the cookies for you! After they were all cooled, I put the cookies into a plastic tub for carrying into work on Monday. Hopefully there will be some left for my coworkers. (hic!)

These cookies can be made in a variety of sizes, but I think this size (about 47 grams raw or 45 grams after baking) is “proper cookie size”. At 219 kcal each, you can be satisfied with just one, or splurge and have two, without having to worry too much about your exercise regimen.