Carrot cake is one of the easiest and most flexible cakes you can possibly bake. Its rough, “homemade” texture requires no unusual ingredients to buy, bulky equipment to store, or special techniques to master, yet the results can be so satisfying. Earlier this year I did Joanne Chang’s carrot cake, from Flour, which was fairly fancy as these things go, but this weekend I did King Arthur’s homier, whole-grain carrot cake (from Whole Grain Baking, Countryman Press, 2006; p. 419). The whole process took only a couple of hours active cooking time — I got back from a long bike ride around sunset, and didn’t even start baking until after supper. Rather than baking a layer cake like the one I did earlier, this was a more rustic sheet cake, which meant that I could get far more servings out of a single recipe: 24 2¼×2⅙-inch rectangles, as opposed to the 16 (at best) wedges from a round two- or three-layer cake. Of course, that also made the frosting process a lot easier and faster. After doing 63 miles of riding, I even felt I could treat myself to a piece of cake on Sunday, in addition to my usual one on Monday at lunch, and despite my best efforts I still ended up bringing some home from work anyway. Everyone at work loved the cake, but a few people (predictably) did not like the super-sweet cream-cheese frosting. I did end up using a few specialty ingredients, which I think contributed to the overall result in meaningful ways, but that’s not to say you couldn’t make a great carrot cake without them. Here is how I did it:

We start, of course, with the mise en place. This one is pretty important to do, because you really want to make sure you have the carrots and nuts prepped ahead of time. Some carrot cakes call for the addition of canned crushed pineapple (drained, of course) and coconut, but I prefer raisins, and this recipe gives both options. The recipe also calls for either walnuts or pecans (or I suppose you could use both); I went for the pecans in deference to a coworker who is allergic to walnuts. For best flavor, it’s important to toast nuts before adding them to a batter (or frosting), so I did that while I was eating dinner. So the ingredients were as follows: 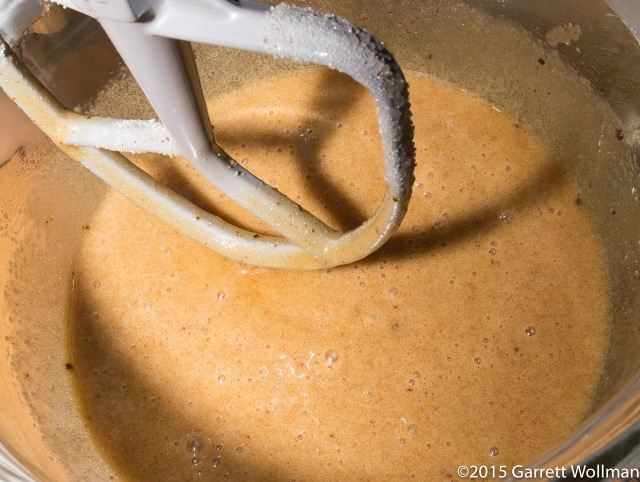 The wet phase of the carrot cake starts out like a sweet mayonnaise. First, the four whole eggs are beaten together in the mixer. (I used my stand mixer for this but a hand mixer would have worked as well — it’s just more difficult to hold onto the mixer while adding the other ingredients.) Then, the entire quantity of oil is drizzled slowly into the beaten eggs, with the mixer running, to form an emulsion. After that, the vanilla is beaten in, followed by both sugars. (Because the dark muscovado is considerably lumpier than traditional (reconstituted) brown sugar, I went to the effort of mixing it by hand with the white sugar before adding, to break up the bigger lumps, but there are always some lumps left over, as you can see in this photo.) All of the dry ingredients are whisked together and then mixed into the wet, followed by the shredded carrots and raisins, and it’s done — total mixing time about five minutes. 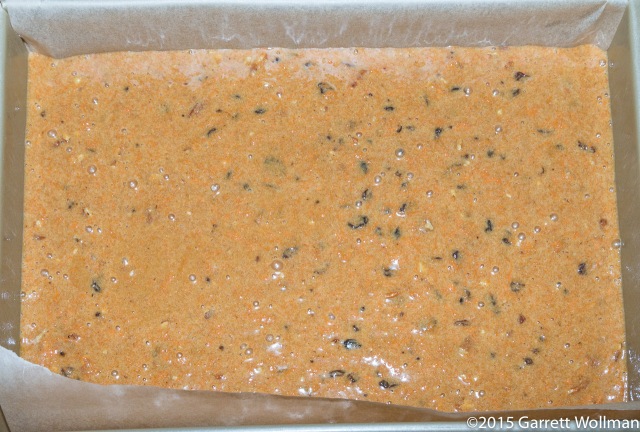 I prepared the pan by spraying it with baking spray, but the primary release aid for the cake is a parchment sling. Doing it this way would allow me to leave the cake in the pan until after it was frosted, while still being able to remove it for cutting so as not to damage the non-stick surface. The cake bakes in a 350°F (175°C) oven for just about 50 minutes. 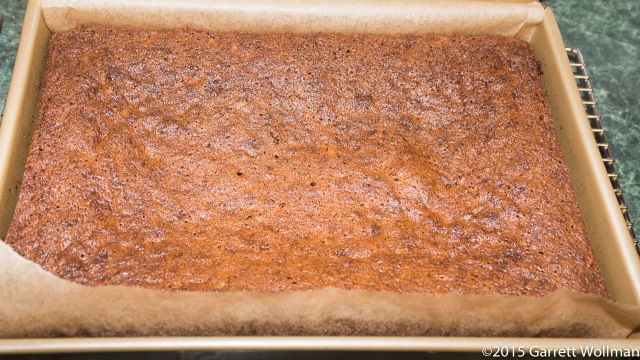 The cake takes a couple of hours to cool before it is ready to be frosted. You’ll note that, because of the size and shape of this pan, the cake rose significantly higher around the outside than it did in the center; if having an even cake surface matters, using a round cake pan would definitely be recommended. 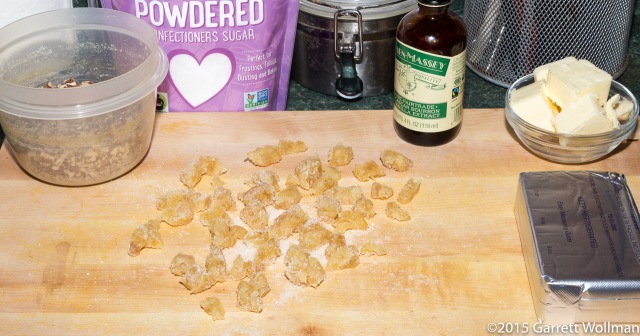 The topping suggested for this cake goes a little bit beyond the cream-cheese frosting that is traditional for carrot cakes: this recipe adds chopped nuts (more toasted pecans, in my case) and chopped candied ginger as well. I tried mincing the candied ginger in the food processor, which was a mistake: it just formed a gooey mass which I then had to cut into smaller pieces by hand. As is usual for cream-cheese frosting, it starts with half a pound (225 g) of cream cheese and some unsalted butter (3 oz or 85 g), both of which should be fully softened, at room temperature, before you start. (In fact, I took them out before I even started on the cake, just to be absolutely sure.) The frosting is sweetened with a whole pound (450 g) of sifted confectioner’s sugar, and flavored with a teaspoon of vanilla extract, in addition to the nuts and ginger. I did use the food processor to chop the nuts, so they didn’t end up particularly uniform, but I sorted the bits to put the larger pieces mainly into the cake batter and the smaller pieces into the frosting.

I used the stand mixer again for the frosting, and here too you could use a hand mixer with only a small increment in difficulty. The two fats are whipped together until fluffy, then the confectioner’s sugar is added, a cup at a time, starting on low speed and increasing to medium-high for each addition. After all the sugar is added, the flavoring ingredients are stirred in, and the mixer speed increased again to evenly distributed the flavorings. Finally, the viscosity of the frosting can be adjusted by adding up to a quarter-cup (60 ml) of cold milk, a tablespoon at a time, until it’s easily spreadable. (Once allowed to sit, the frosting will set back up again, so if you are interrupted while baking you may need to add additional milk.)

The great thing about baking a sheet cake like this is that frosting it is pretty trivial: dump the whole batch in the middle of the cake, and use an offset spatula to push it towards all four edges until it’s reasonably even. (Or even don’t — leave some parts with less frosting, because not everybody likes a lot of frosting!)

These two pieces of cake were left over at the end of the day. I realized that I had forgotten to photograph an individual piece for this article, so I brought both of them home along with my baking pan. Look at how luscious and moist this cake is, studded with plump raisins, with spicy and crunchy bits in the sweet frosting…. I don’t think I had a single complaint about the cake itself, and only a very few about the frosting (evenly divided between those who wanted more frosting and those who thought it was too much). Now to figure out how I’m going to have enough dietary reserve to actually eat these two pieces!