I’d like to claim that I was incredibly foresightful and deliberately chose a low-calorie chocolate torte to make for the first regular work day after two consecutive pig-out holidays (Christmas and New Year’s), but in fact it was sheer dumb luck — and a desire to schedule something relatively simple, not knowing when I originally planned out my winter baking schedule what I would be doing for the long holiday weekend. “Bittersweet Deception” is a dense chocolate torte from Alice Medrich’s Seriously Bitter Sweet (Artisan, 2013; p. 130) — but because it contains no dairy ingredients (and in particular neither butter nor cream) it is relatively low-calorie and lower in fat that your typical torte. It’s made by a modified soufflé method; here’s how:

The ingredients are super simple, and start with 140 g of bittersweet chocolate, chopped — I used Valrhona Guanaja (70%) feves. There’s also 50 g of cocoa powder (I used TCHO natural cocoa, but you can use either natural or Dutch-process for this recipe), 16 g of all-purpose flour, and 200 g of sugar. Rounding out the “sauce” phase are 7 fluid ounces (about 200 ml) of water, a tablespoon of rum, and a teaspoon of vanilla. The egg phase is composed of two whole eggs and one egg white. In addition, and not shown here, there is boiling water, used to construct a bain marie, and a pinch of salt for seasoning.

The first step in the soufflé method is making the “sauce”. In this case, it starts rather like a cooked pudding: the cocoa, flour, water, salt, and half the sugar are stirred together to make a slurry, and this is then cooked on the stovetop until thickened, about two minutes after it comes to a simmer.

The hot “pudding” is then poured over the chopped bittersweet chocolate and whisked until smooth; this will cool it enough to then add the rum and vanilla extract.

While the “sauce” continues to cool, the eggs are beaten with the other half of the sugar until light and foamy, but not stiff, about five minutes on high using a handheld mixer. The egg foam is then carefully folded into the chocolate “sauce” to make the final cake batter. 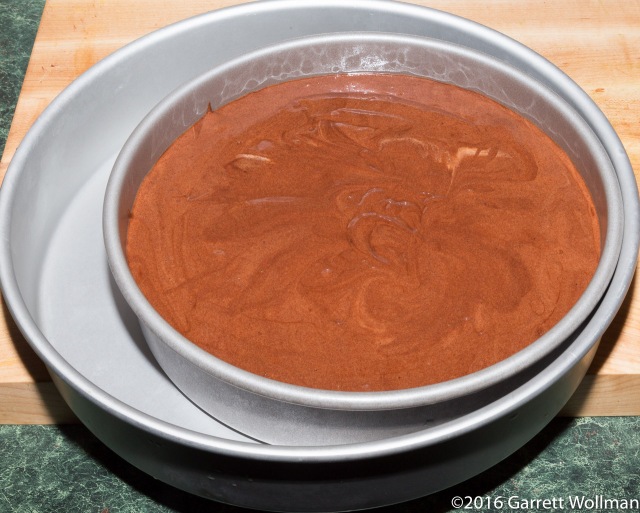 The torte batter is poured into an eight-inch (200 mm) round cake pan that has been prepared with baking spray and a parchment round. I prepared my cake pan too early, and apparently didn’t use enough baking spray; this torte loves to stick to the aluminum surface. For the bain marie I used a ten-inch (250 mm) cake pan, but for safety, waited until both pans were in the oven to add boiling water to the outer pan, reaching about halfway up the inner pan. (Professional bakers generally eschew springform pans, especially when using a bain marie, because they tend to leak.) 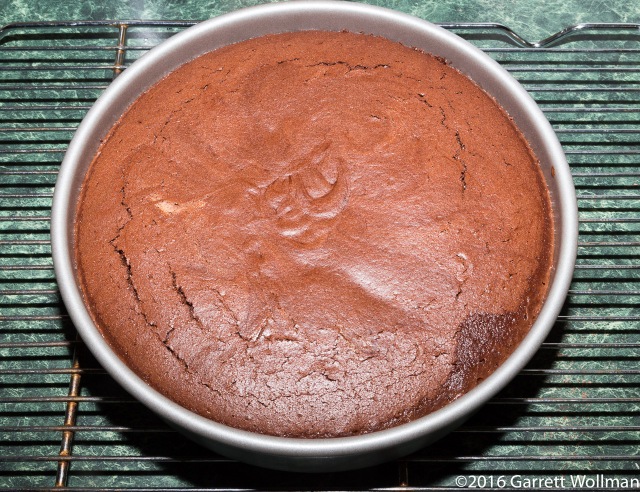 The torte bakes in a 350°F (175°c) oven for about 30 minutes — I left it in slightly too long; it should be a bit jiggly in the center when you take it out. (Better luck next time!) See that dark spot? That’s where I accidentally splashed hot water from the bain marie onto the cooked torte. (Better luck next time, squared!) It survived, but was a bit messier to depan than I think it should have been. After cooling fully on the wire rack, the torte is wrapped in plastic and refrigerated overnight before depanning. 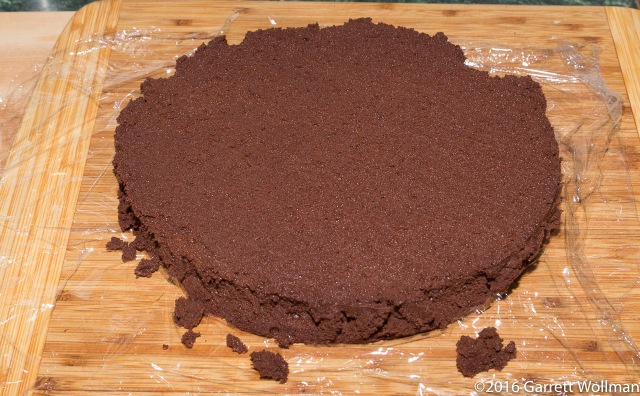 The following morning before work, I flipped the torte out onto a board. Or rather, I tried to flip it out; it wouldn’t come. I then ran a knife around the outside, and finally it came, but not quite in one piece, sadly. (What was I saying about better luck next time?)

I inverted the torte onto a serving platter and sifted confectioner’s sugar on top to dress it up. My tasters did not notice any of the problems, and in fact everyone who tried it thought it excellent — except for one person who felt it was not quite chocolatey enough for her taste. On the other hand, with this nutritional profile, you can always have more than one slice if you’re not satisfied:

Usually I end up making more servings than the recipe specifies, to keep the calories under control. Not this time: Medrich says 10–12 servings, and that’s exactly what I got. Even at the low end, 207 kcal is amazing for this type of dessert!

This entry was posted in Food and tagged Alice Medrich, cake, chocolate, recipe, torte. Bookmark the permalink.
%d bloggers like this: