“Cinnamon Honey Coffeecake”, from Moosewood Restaurant Book of Desserts (Clarkson Potter, 1997; p. 269) looked from the outset like an interesting idea: a yeast-raised coffee cake with an orange-flavored filling in the middle. Unfortunately, the final product was quite disappointing, which is why I’m posting this nearly a week late. It turned out quite dry (victim, I’m sure, of an over-long baking time), with no detectable cinnamon or honey flavor, and the orange filling sank to the bottom. Here’s how it went down: 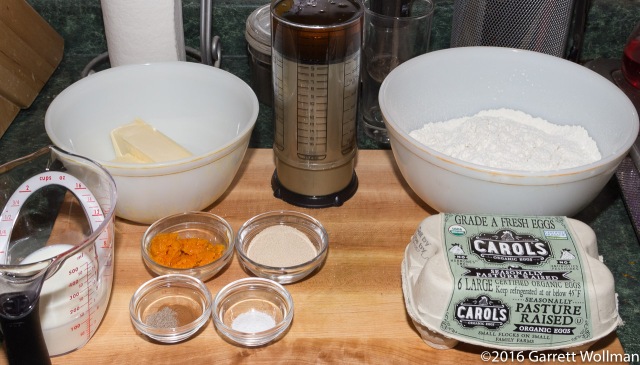 The main part of the cake batter is a yeasted, egg-enriched, whole-wheat sweet bread dough. The recipe, rather confusingly, calls for “1 ounce yeast (2 packages)”; since my yeast comes in one-pound packages, I tried weighing out a whole ounce of it, and still found it to be way too much. I ended up backing off to two tablespoons of instant yeast after failing to find any useful advice on either the yeast package or the ingredient notes in the cookbook. The flour is a combination of one part whole-wheat flour to two parts “white” flour (I used pastry flour, which the book says works in all recipes that call for generic “white flour”), for a total of 13½ oz (380 g). The other dry ingredients are half a teaspoon of salt, a teaspoon of ground cinnamon (I used cassia), and a quarter-teaspoon of cardamom; the wet ingredients are half a cup (120 ml) of milk, 6 ounces (170 g) of melted unsalted butter, four eggs, half a cup of honey, and a tablespoon of orange peel. The milk is heated to just above body temperature and then used to proof the yeast; then all the wet ingredients are combined, and finally the dry ingredients are mixed in. The resulting loose batter is beaten by hand for a minute or so to develop gluten, and then allowed to rest while the filling is made.

The filling is made by cutting half a stick (2 oz, 55 g) of cold butter into half a cup (2¼oz, 60–65 g) of flour, then folding in three quarters of a cup (180 ml) of orange marmalade. The prepared pan or pans — the recipe suggests a Bundt brand pan, but I used a standard tube pan of like volume — are then filled with half of the batter, all of the filling, and finally the remaining batter.

The filled pan is covered and allowed to rise in a warm environment — I made a steam box from my oven using a pan of hot water — for an hour. When fully risen it looks like shown above. This is then baked in a 350°F (175°C) oven — the recipe clearly says “for 1 hour”, with no other termination condition, but when I took it out, I stuck my probe thermometer in and found to my horror that the cake had already passed the boiling point of water; ordinarily, a bread should be removed from the oven well before it gets that hot, at about 195°F (90°C) unless it’s supposed to be really dry. 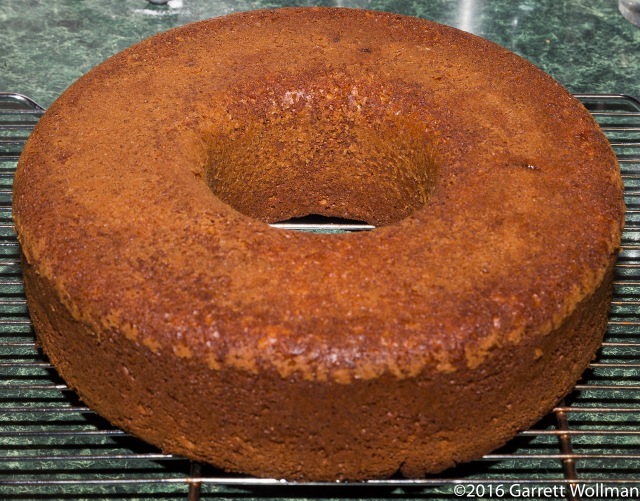 As expected, it was overbaked. I suspect that it should have come out after about 50 minutes, 55 at the very most.

You can see from the appearance of this slice that the filling, being denser than the main dough, sank to the bottom. This was the only actually moist part of the cake.

Although the recipe doesn’t call for any such thing, I felt the need to dress it up a bit by applying some powdered sugar. This failed to disguise the fact that it was really dry, and despite the official title of the recipe, the only recognizable flavor was that of the oranges.

This entry was posted in Food and tagged coffee cake, honey, Moosewood, oranges, recipe. Bookmark the permalink.
%d bloggers like this: