This post marks the end of my previously scheduled winter baking program. I have one more recipe to write up (a chocolate-chip cookie); I don’t have immediate plans for other recipes but they will probably be in a similar vein for a while, because we are approaching the season at work when a great surfeit of “free” food is distributed. Today’s recipe comes from Jeffrey Alford and Naomi Duguid’s cookbook Home Baking (Artisan, 2003; p. 145); it makes two 9×5 loaves of banana bread. None of my tasters could recognize a coconut flavor in this “Banana-Coconut Bread”, but the texture was noticeable when pointed out to people.

Like any banana bread, this one starts with very ripe bananas. Because they very so much in size, it’s pretty common for recipes to specify the volume of liquefied banana; to make two 9″×5″ (225×125 mm) loaves takes three cups (720 ml) of mashed banana — I used a food mill, but the recipe actually calls for doing it in a blender. Other ingredients seen here (counterclockwise) are 17 oz (485 g) of all-purpose flour, two tablespoons of demerara sugar (for sprinkling, so exact measurement is not required), a teaspoon of freshly grated nutmeg, half a tablespoon of baking soda, 75 g of unsweetened dried shredded coconut, 3 tablespoons (45 ml) of dark rum mixed with a ½ tsp (2.5 ml) of white vinegar, two sticks (225 g) of unsalted butter, and finally, 400 g of granulated sugar. Note no eggs — you could easily make a vegan version of this recipe by substituting fake butter.

The recipe proceeds, somewhat unusually, by a variant of the butter-cake (creaming) method. Most banana breads (which are properly quickbreads) are normally made by the muffin method, using liquid fat, but here we start by creaming solid butter together with the sugar, then adding the flavoring (rum and vinegar), and finally alternating the banana puree and combined dry ingredients in three lifts. Finally, the coconut is stirred in, mixing only until combined. The prepared batter looks like this, and comes to about 1900 g total, which is split between two prepared loaf pans.

The batter is thick enough that it will not self-level, so after dividing it between the two pans, it’s necessary to get in with a small spatula and spread it out evenly. (Some variation is OK.) Then about a tablespoon of demerara sugar is sprinkled over the top to form a sweet, crunchy coating in the oven. The loaves are baked together in a 350°F (275°C) oven for just about an hour.

You can see that I didn’t do the greatest possible job in evenly dividing the batter, but other than the cosmetic difference it matters little. I’m not sure what happened in the upper left corner of the left-hand loaf — it seems to have gotten substantially more sugar than anywhere else. In any event, the baked loaves have to cool in their pans (on a wire rack) for about 20 minutes so that the starches in the flour have a chance to set.

After turning out the two loaves, they must finish cooling on the rack. (If they were left in the pans until completely cool, escaping steam would be trapped next to the crust and eventually condense, causing the crust to become soft if not downright soggy.)

After the bread was fully cooled, I took a couple of slices right off for immediate eating. (Luckily I had gotten some exercise already!) You can see the characteristic texture of banana bread here, with the dark specks (what is that, anyway?) that come from pureed banana, giving rise to a much darker color than the ingredients might otherwise suggest. 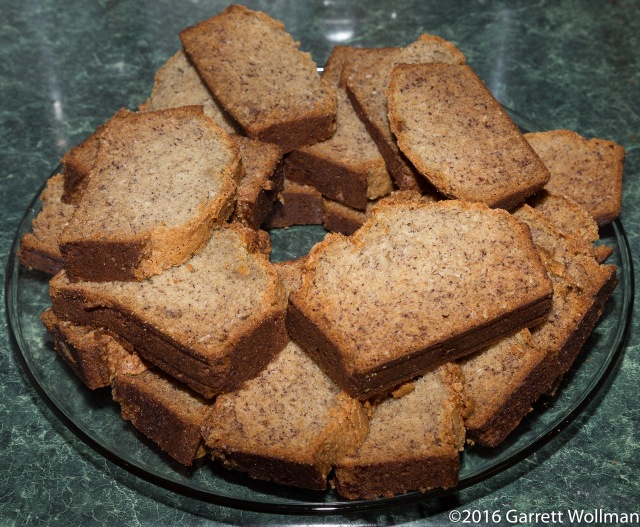 I then sliced up the remainder of both loaves and set them out on a platter to bring in to the office. Each loaf makes twelve ¾″ (2 cm) slices, for a total of 24 slices — although with a “bread” this soft it’s really hard to accurately measure and cut slices, so I ended up with some thicker and some thinner than spec. I wouldn’t think you were a bad person for cutting larger slices. Everyone who tried it at work liked it, and some tasters liked it quite a lot, but others thought it was nothing special. Nobody noticed the dark rum, even after I told them about it. I had so much of it that it took two days to give it all away.