It’s been a while since I did a food post (probably disappointing to all of you who followed me just for the recipes), so for the first of the year, here’s another Joanne Chang cookie recipe, Oatmeal–Raisin–Cranberry Cookies, from Baking with Less Sugar (Chronicle Books, 2015; p.–50). This one differs from the standard oatmeal-raisin cookie recipe in more ways than the obvious: these cookies are soft, moist, and tender rather than the chewy toffee-like Default Recipe. There is only 75 g of sugar, so they’re noticeably less sweet than the old standby, even with sweetened dried cranberries added to the mix. There is, however, a substantial amount of fat, between the half-pound (225 g) of butter, two eggs, one egg yolk, and 75 g of walnuts — and unusually, the butter is melted rather than being creamed with the sugar. For additional flavor, I used black walnuts rather than English.

Of course I couldn’t resist eating some of the cookie dough before baking. The dough is really quite liquid, almost a batter, when fresh; unlike some other cookie recipes, you can’t skip the overnight rest in the refrigerator, because you won’t be able to form the cookies properly until the butter resolidifies. I used a #30 disher to get approximately 50-gram dough balls, which made 13 cookies (but my assumption is that I actually should have gotten 18 if I hadn’t eaten any of the dough). Chang calls for squashing the dough balls with the palm of one’s hand onto the (parchment-lined) baking sheet, as she does in most of her other cookie recipes; these cookies do not spread much, even after 16 minutes in a 350°F (175°C) oven, so the amount of squashing on the way in will determine the diameter of the baked cookie. 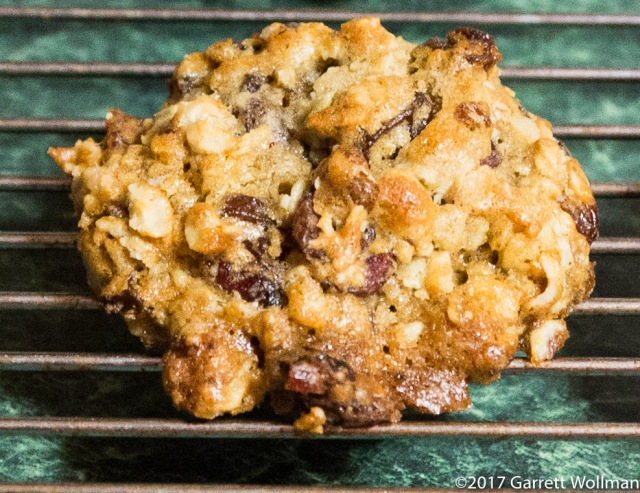 Since I just made these cookies on Sunday, and today is a public holiday (I’ll actually be at a hockey game in Detroit as this post goes up) I don’t have any comments from co-workers yet. I might actually not bring these in to work at all: there aren’t very many, they aren’t super-high-cal, and I could stand to have a dessert at home that isn’t chocolate. (No, seriously, sometimes I really would like to have something other than chocolate. Only sometimes, not all the time!)