Well, that backlog I mentioned in the last post is still there, but I made something this weekend, and since I didn’t actually take many photos, I figured I might as well write about it while it’s still reasonably within reach of memory.

I’m a sucker for a new recipe for chocolate-chip cookies (or brownies — and I did the rye brownie recipe from the same source a few months ago). This past week I received a big order (more than 6 kg) from Chocosphere, all various Valrhona products, mostly repackaged from their commercial bakery line (you can buy most of these products in 2 kg or 3 kg packages, which was way more commitment than I was interested in, but Chocosphere repackages them into home-baker-friendly 1 kg bags), including their 60% cacao chocolate chips (“chips noires”). By US standards you’d probably call them “mini chips” — they aren’t as big as the standard Nestlé/Hershey/Ghirardelli/Guittard cookie chips — but I figured I might as well find a cookie recipe to try them in, and ran across the “Egg Yolk Chocolate Chip Cookies” in Claire Ptak’s The Violet Bakery Cookbook (Ten Speed Press, 2015; p. 140). She attributes the basic idea — of changing the texture of the cookie by using only egg yolks instead of whole eggs — to French pastry chef Pierre Hermé.

I don’t have a photo of the mise em place here. The ingredients are the ones you’d expect, but this recipe is formulated for “even” proportions in metric measures: 250 g softened unsalted butter, 200 g light brown sugar, 100 g granulated sugar, ½ tsp vanilla extract, 3 egg yolks, 325 g all-purpose flour (betting you could use pastry flour here, since the recipe was probably developed for soft wheat), 1¼ tsp kosher salt, ¾ tsp baking soda, and 250 g dark chocolate chips (“or broken-up bar of your favorite chocolate” — not many chocolates come in 250-gram bars!). The recipe proceeds by a modified creaming method: ingredients are combined in the normal order, in a stand mixer, but only until just mixed; Ptak specifically cautions “you are not aiming for light and fluffy here”. The recipe yields about 1175 g of dough, and for the stated yield of 16 cookies, that’s 70–75 g of dough per cookie.

The second departure from the usual method is that the dough is portioned and frozen completely before baking. I found experimentally that using a #20 disher — the most common size, which if you only have one disher is probably the one you think of as “the ice-cream scoop with the sweeper thing” — and leveling off the open end against the side of the bowl comes to nearly exactly 70 g (a few were as low as 65 and some others were as high as 80 but I’m picky). These are placed in a parchment-lined baking pan — spacing doesn’t matter — covered in plastic wrap, and frozen for at least an hour (I left mine in overnight). To bake, the solid balls are placed on a parchment-lined cookie sheet, spaced widely, and allowed to thaw slightly (5–10 minutes) before baking in a preheated 355°F (180°C) oven for 18–20 minutes. (I don’t know who did that unthinking Fahrenheit conversion: most people don’t have oven controls graduated that finely, and even for those of us who do, oven temperatures cycle within a range of 20 F° or more anyway. I usually convert 350°F as 175°C but 180°C isn’t materially different. Still, my oven has a digital display so I set it to 355° rather than 350°.)

The photo above shows one sheet of fully baked cookies on the left, and another sheet of still-frozen dough balls on the right. (I ate one of the cookies the previous night, before it was frozen, which is why there’s one missing — it was the last of the batch and a bit runty at only 55 g; probably could have gotten ten more grams for a nearly-full serving with less sampling.) 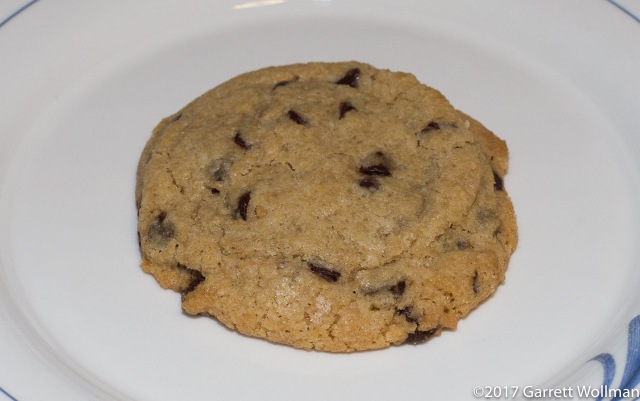 The cookies were allowed to cool completely on a wire rack. Above is a close-up view of a single cookie on a plate. 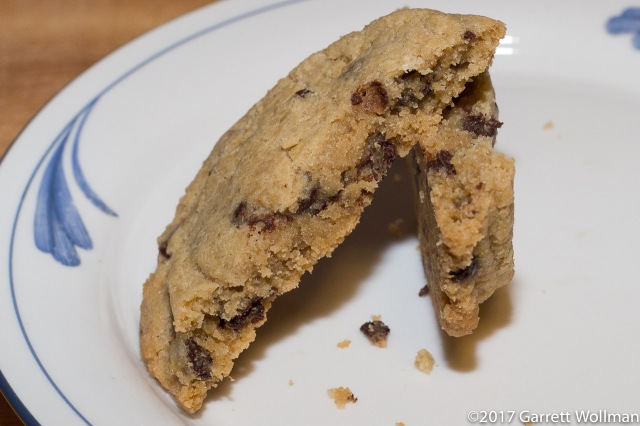 I broke the sample cookie in two to demonstrate the depth and texture. You can see that this recipe is a good match for “mini” chips like the Valrhona ones I used: larger chips would have been less evenly distributed through the dough, but in this style every bite of cookie has some chocolate in it. (Click on the image to see the full resolution: you can see how, even 10 hours after baking, the interior of the cookie is still visibly moist. These cookies are very buttery!)

Overall, these cookies have an extremely tender mouth feel, very different from the crisp texture of the Default Recipe, but still quite enjoyable — they’re almost like a shortbread with chocolate chips, but moister. The flavor has none of the toffee notes of the Default Recipe, either, belying its much higher ratio of brown to white sugar, which must be a result of the much lower baking temperature (both oven and dough temperature). Starting from frozen dough definitely keeps the cookies from spreading quite so much, giving them a good thickness — I make the Default Recipe with 50-gram portions, and these are about the same diameter despite having half again as much dough. Highly recommended. I’m not sure I’ll share any of these with my work colleagues.

In the absence of nutrition data for the Valrhona chips, I substituted the readily available Ghirardelli 60% dark chocolate baking chips for this computation, although they are of the larger “standard American chocolate chip” size.