As I mentioned in an earlier post, there were two runs of men’s bobsled at the Lake Placid World Cup. The first was on Thursday, November 9, in the early evening, and was quite chilly. The second was the following day, in mid-afternoon, in extremely cold temperatures (at least by my standards). Although I had paid for a ticket to Friday’s events, I decided that it was simply too cold for me to be out there and drove home, skipping not only the bobsled (which I was honestly planning on skipping anyway) but also the men’s skeleton, scheduled for 8:30 AM (air temperature 11°F). So this photo gallery is my final one from the BMW IBSF World Cup 2017–2018 from Lake Placid (or indeed from any venue).

By the time the men’s bobsled rolled around, I had already taken over a thousand photos and was close to running out of space on my SD card. I chose not to take any photos during the first heat, so the following pictures from heat two do not show all of the 27 entrants, just the twenty top-ranking sleds. (Assuming I didn’t miss anyone, of course — and speaking of that, if I’ve misidentified anyone, comments are open as always.)

One of the forerunners walks around in the finish area, waiting for the other forerunners to get to the bottom and the track to be declared ready for competition to resume

Some of the hardy fans in the finish area, along with some USABS people (not sure if these were athletes not in the competition or staff members or both) 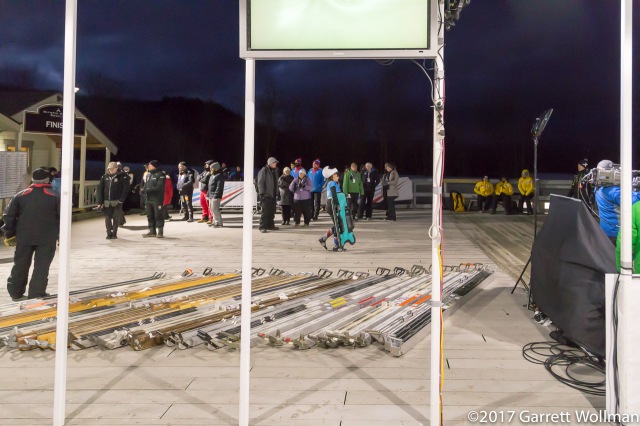 Another bobsled scabbard line-up. At center, the forerunner carries a skeleton sled to the truck that will transport it back up to the start of the track for the next race. 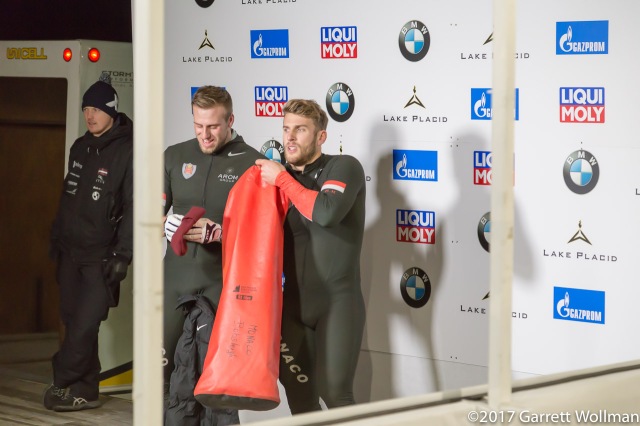 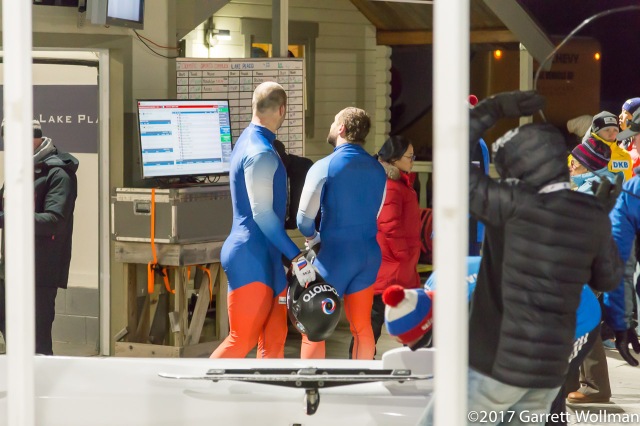 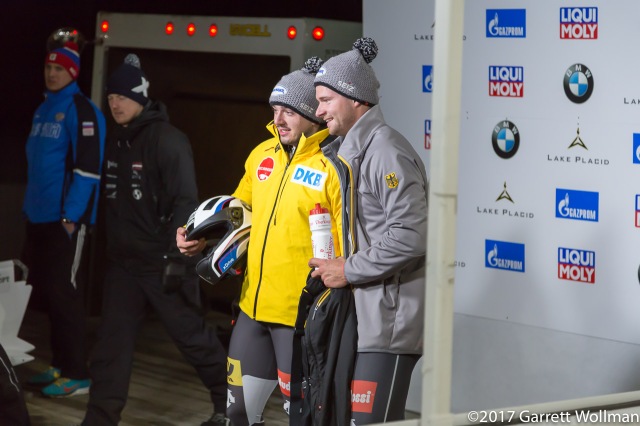 The Latvian men definitely get the award for “most butt cleavage in a speed suit”. 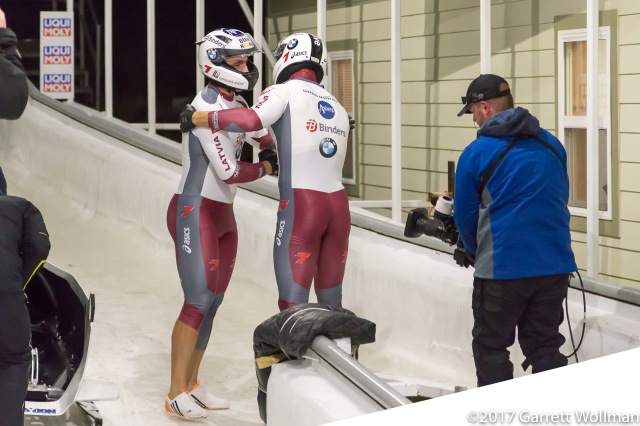 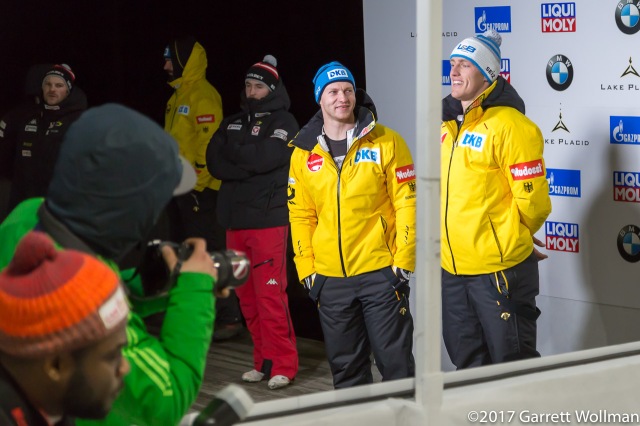 Friedrich and Margis (GER) still waiting in the leader’s box 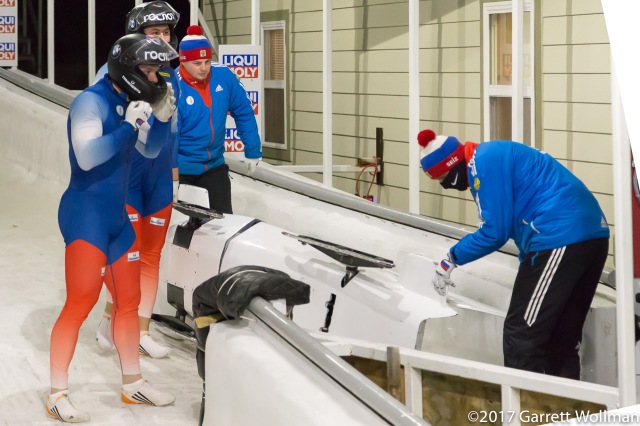 Finish area, late in the evening 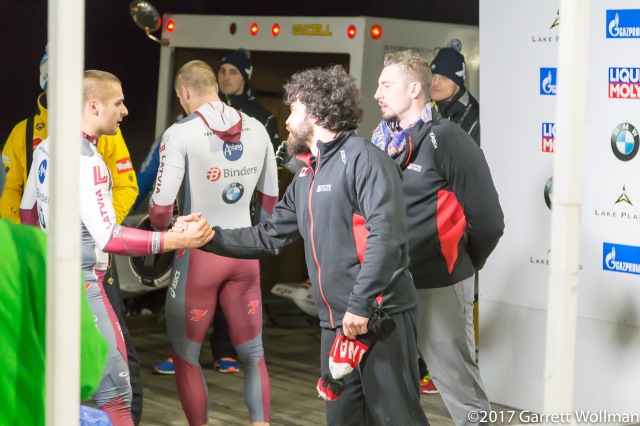 On the finish area TV monitor, Codie Bascue and Carlo Valdes (USA) watch as another sled comes into the finish behind their time. 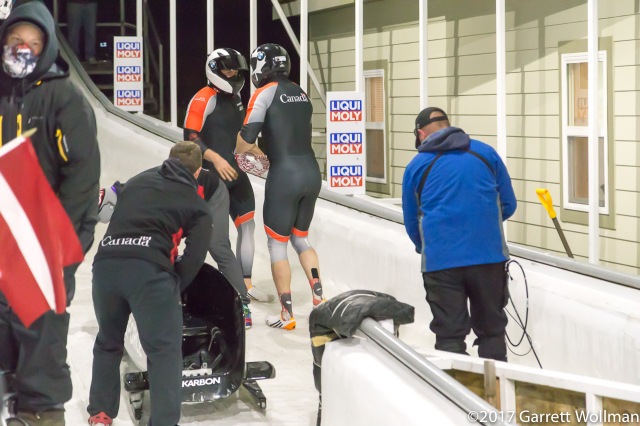 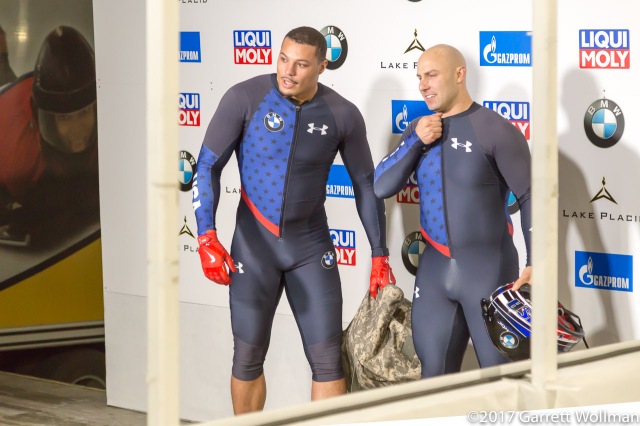 Cunningham and Bailey (USA) watch the final sled down to see if they will remain in first place or take the silver medal.

And that is it for my trip to Lake Placid. I’m writing this in San Antonio now, where I didn’t take any pictures, but hopefully I’ll be back with some long-promised other stuff soon after Thanksgiving.