This is the third of three recipes I did for the holiday season from Luisa Weiss’s Classic German Baking (Ten Speed Press, 2016). Weiss recounts how she felt that she had to include a recipe for Dresdner Christstollen, the classic German Christmas bread, but couldn’t find one that approached the quality of those available at the bakery. So instead she presents a recipe for Christbrot (pp. 252–55), which has the same flavor profile as Stollen but is based on a stronger bread dough with far less butter. I’m not sure how much of an impact the food stylist had on the photos in Weiss’s book, but as you’ll see, mine didn’t look anything as nice as hers, and I was pretty disappointed with the results.

This recipe starts with an advance preparation step: 110 g of raisins, 100 g chopped candied orange peel, and 100 g of chopped candied citron are stirred together with ¼ cup (60 ml) of dark rum and left in a sealed container for two days, opening from time to time for a stir. We then pick up the main part of the recipe with the mise en place.

The fruit-rum mixture is seen in the covered glass bowl at upper right; it won’t be needed until after the first proofing. On the cutting board are the remaining ingredients for the bread: 600 g all-purpose flour, 35 g of fresh yeast, ¼ tsp salt, 70 g granulated sugar, 120 g unsalted “high-fat, European-style” butter (I again used “Plugra” brand), the grated zest of one lemon, two eggs, ½ cup (120 ml) tepid milk, and 110 g of blanched almonds. Weiss provides an alternative procedure to substitute instant yeast, but since I was able to get cake yeast I didn’t take that option. The butter will be melted and slightly cooled before we see it again.

The Christbrot dough starts by making a well in the center of the flour (you’ll notice that I changed from the Pyrex bowl shown at top to a larger stainless-steel bowl just to have enough space to do this). The cake yeast is crumbled into the well, mixed with about a third of the warm milk (40 ml or 8 tsp) and a bit of the flour, and then set aside to allow the yeast to “wake up”.

While the yeast is reactivating, all of the wet ingredients — the remaining milk, melted butter, sugar, salt, and lemon zest — are simply whisked together. In retrospect, I should have chopped up the grated lemon zest a bit; my rasp grater makes long threads of zest which get caught in the tines of the whisk and don’t get distributed very effectively.

The wet ingredients are just dumped into the bowl with the flour and yeast and mixed to form what authors of baking cookbooks like to describe as a “shaggy” dough. At this point, Weiss calls for kneading by hand, at which I am absolutely terrible — I have no patience for it and lack much in the way of manual dexterity, which means I rarely ever manage to knead bread dough sufficiently in even twice the specified time. If I ever made this recipe again, I would definitely employ mechanical assistance, as I think my poor results were in large part due to poor kneading. After kneading, the dough is allowed to proof for 30 minutes.

After proofing, which didn’t seem to do much to my dough, the next step is to flatten it out into a disc, then add the almonds and fruit mixture, drawing it back up into a ball and kneading again to distribute the fruit and nuts evenly through the dough. 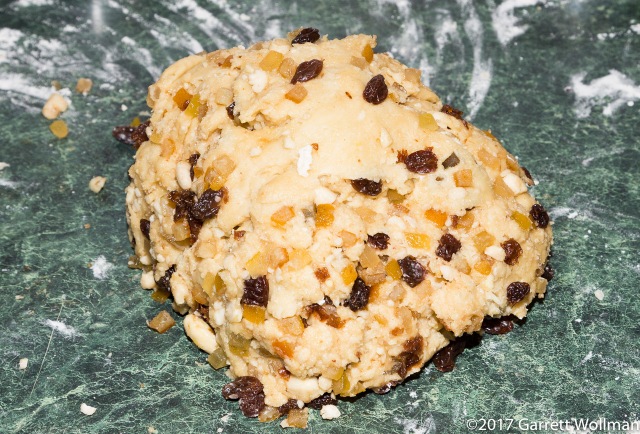 As you can see, the dough ball doesn’t look all that nice at this stage. It doesn’t look at all like it could possibly lead to the finished product shown in the cookbook, which seems somehow to have all the fruit confined to the inside (and also a much smoother texture). Again, if I had to do it over again, I’d use the stand mixer with a dough hook. After this it goes back in the bowl for another 30-minute proof. 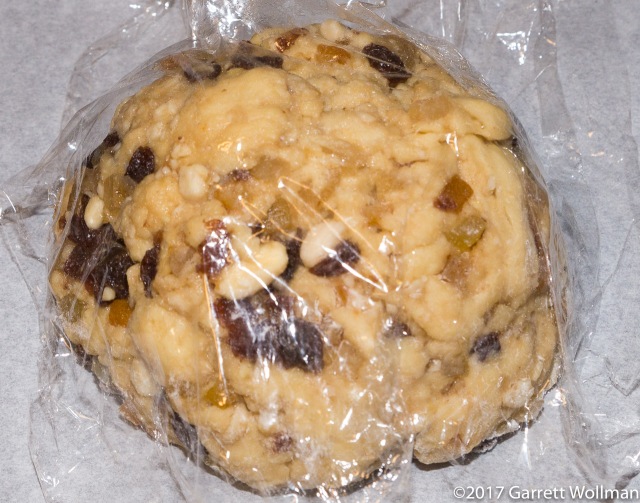 After the second proof, we’re still not done. Now the dough ball is divided in two, both halves re-formed into rounds, and placed on a parchment-lined baking sheet for — you guessed it! — another 30-minute proof. Meanwhile, the oven is preheating to 400°F (200°C).

This is not what Christbrot is supposed to look like after 40 minutes of baking: mine was hard and craggy, with bits of blackened raisin (or citrus peel) sticking out everywhere, but still underdone on the inside (not that I knew until much later). While the loaves were baking, I was supposed to be making a vanilla-sugar topping in a “small food processor” — nope, haven’t got one of those — by grinding together half a vanilla bean and 100 g of granulated sugar. I tried to do it in my spice grinder, with fairly poor results.

The loaves get a two-stage sugar coating. First, 130 g of melted butter (for once, Weiss doesn’t specify “high-fat, European-style” butter here) is brushed onto the surface of the hot loaves using a pastry brush. Then, the finely ground vanilla sugar is sprinkled over the top and sides, as seen in this photo. Finally, 100–150 g of confectioner’s sugar is sifted over the top and sides and the loaves are allowed to cool completely.

The second sugar coating seems to cover up the flaws in my loaves, but they reappeared as soon as I tried to slice into them — the seams between layers opened up and the bread tore rather than forming even slices like the illustration in the book shows. And as I mentioned, the fruit which ended up on the exterior of the loaf was exposed to oven heat and turned quite nasty and bitter, beyond the ability of the sugar coating to mask. Weiss says to wrap the cooled loaves in aluminum foil and freeze, then thaw at room temperature a day before serving.

I’m not inclined to repeat this particular recipe — and I ended up eating most of it myself, as I had trouble giving away even one loaf, never mind both. It’s probably for the best, then, that I didn’t bother to enter the ingredients in my nutrition calculator to tell you just how unhealthy it turned out to be when I ended up eating a whole loaf basically by myself.