I know it’s been an incredibly long time since my last proper recipe write-up, so here’s a lovely little cake from Claire Ptak’s The Violet Bakery Cookbook (Ten Speed Press, 2014 — wow, I’ve been working through this cookbook for a really long time now). It took me an incredibly long time to get up the energy to make this, after a long, dreary and physically inactive winter; I had the cookbook open to this recipe (p. 125) on my kitchen counter for six weeks before I finally managed to get all the ingredients together and actually make it. (It had been so long that my camera wasn’t even set up properly for kitchen photography: I had the wrong lens on and no flash.) There were a few tricky bits to making this cake but it came out very good and was gone in about 45 minutes when I brought it to the office. I won’t deny that I ate a slice or two myself. Here’s how it went. 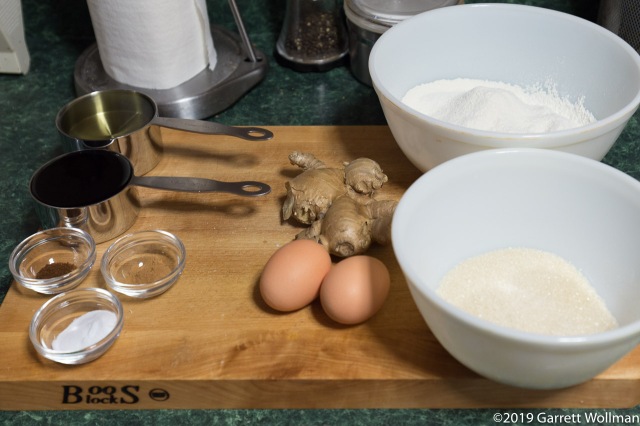 We start, as always, with the mise en place. The dry team is quite simple, comprising 300 g of all-purpose flour, ¾ tsp of ground cinnamon, and ¼ tsp of ground cloves. (There is no added salt, and the baking soda at front left is actually part of the wet team!) Not shown in the photo is 225 g of boiling water; the other wet ingredients are 150 g fresh ginger rhizome, two large eggs, the aforementioned 2 tsp of baking soda, 200 g vegetable oil, 250 g molasses, and 150 g of granulated sugar. 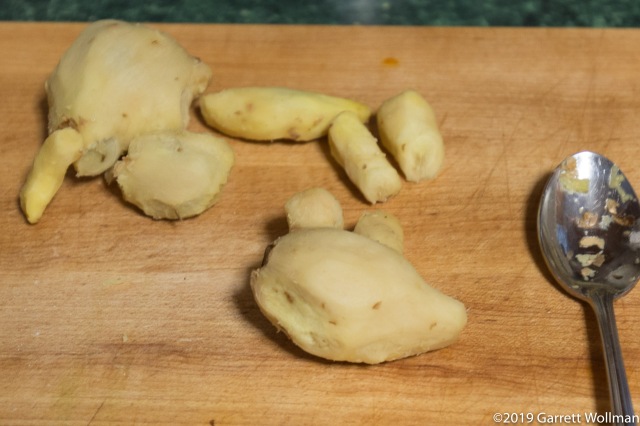 First step is to peel the ginger, which every bit of advice I’ve ever seen is best done with a spoon. Maybe with a grapefruit spoon; I found the ordinary teaspoon I used slipped on the smooth ginger skin, so peeling took quote some time. The peeled ginger is sliced into 2-mm-thick discs and then chopped (Ptak says “pulverize”) in the food processor. 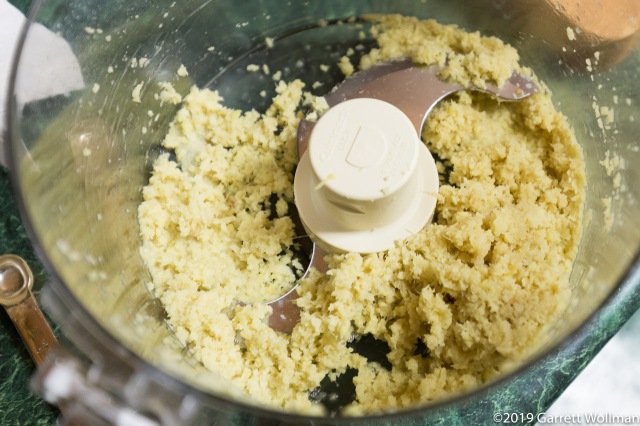 I felt like this was a bit drier than I was expected, and maybe not as “pulverized” as it could be — a smaller work bowl would have made shorter work here — but I dutifully set it aside and continued on to the rest of the batter. (I needn’t have worried about the size of the pieces; aside from two unchopped pieces which were easy to pull out before baking, the rest of the ginger vanished into the cake batter and no chunks were detectable in the finished cake.) It was easy enough to combine the flour and spices with a whisk, but the wet ingredients were another matter. 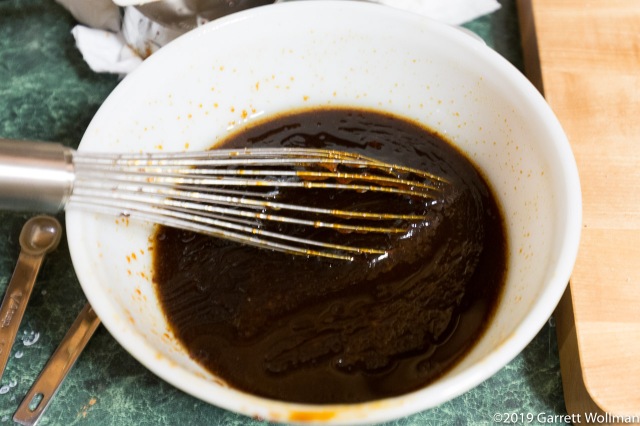 Whisking together thick molasses, additional sugar, and vegetable oil was quite challenging, with the immiscible oil, layered on top of the much denser molasses, constantly threatening to escape over the sides of the bowl onto my countertop. With much effort, I was finally able to get the oil and molasses to at least partially emulsify and turned the kettle back on to bring my now-cooled water back up to temperature. 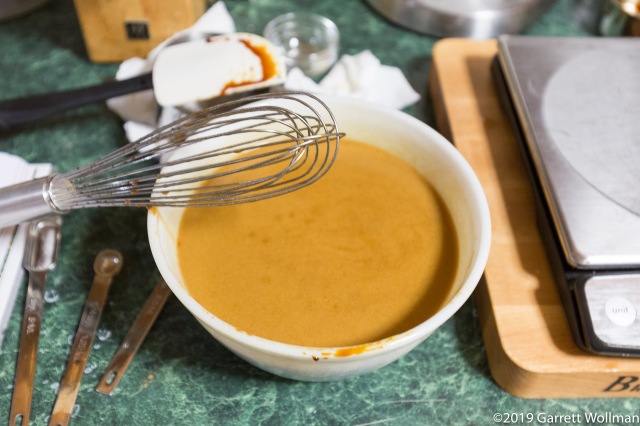 The baking soda is dissolved in the boiling water, causing it to release a substantial amount of carbon dioxide gas (and converting some of the bicarbonate into sodium hydroxide, a/k/a lye). The soda solution is then mixed with the molasses mixture, producing more bubbles (molasses is somewhat acidic) and creating a tan foam which floats to the top of the mixture. 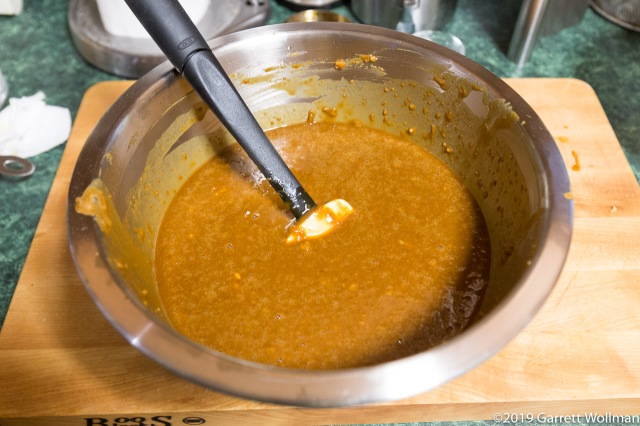 At this point I realized that I really did need a bigger bowl, because after adding the chopped ginger to the other wet ingredients I still needed to add the dry ingredients and the eggs (beaten before adding, and yes they’re added last, after the flour mixture). 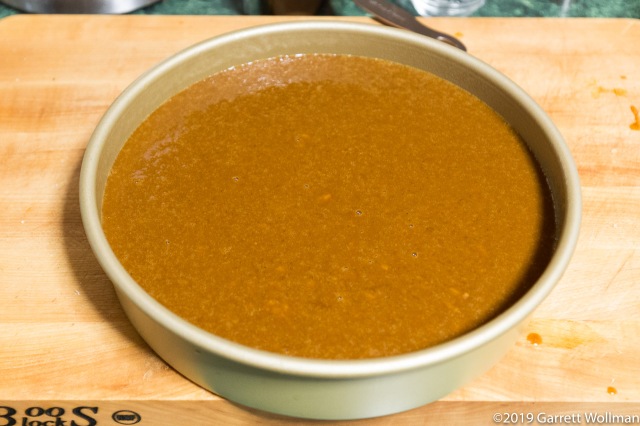 The recipe calls for baking in either one nine-inch or two eight-inch cake pans, parchment-lined and buttered. If I had to do it again, I’d probably add a parchment collar around the sides of the pan, in addition to the usual disc on the bottom — but I’d probably also make two smaller cakes as described. The cake or cakes bake for an hour in a 300°F (150°C) oven, until a tester inserted into the center comes out clean. 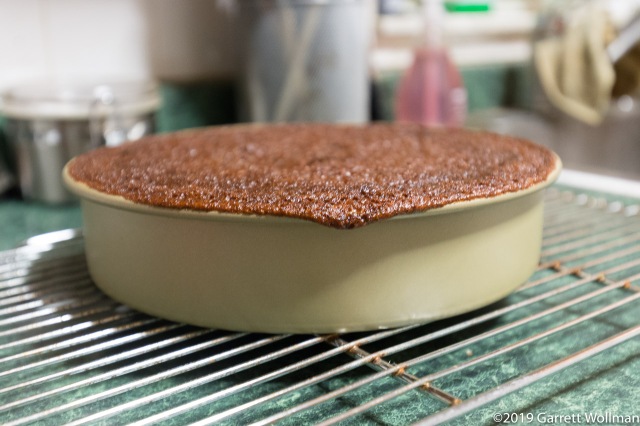 As you can see, the cake actually rose so much in the oven that it overflowed the pan. The cake is cooled in the pan for ten minutes to allow the protein matrix to set up, before depanning and returning to the rack until fully cooled. 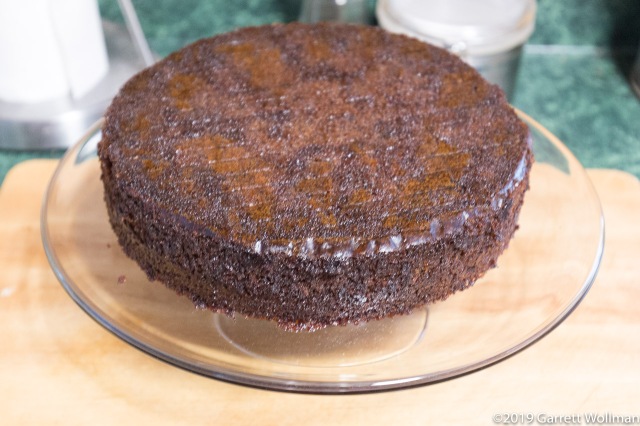 After cooling, I compared the two surfaces and decided that the “bottom” of the cake, which had been touching the parchment while baking, was the better surface to display, so I inverted it onto my cake stand before applying the icing. Ptak’s icing is a standard confectioners’ sugar and lemon juice icing; she calls for 250 g of the sugar and 2–3 tsp of fresh lemon juice — I found that this amount of juice did not come even close to wetting the confectioners’ sugar, and even after adding the entire lemon’s worth of juice (about two tablespoons) I still needed to add water to thin the icing enough to be spreadable. 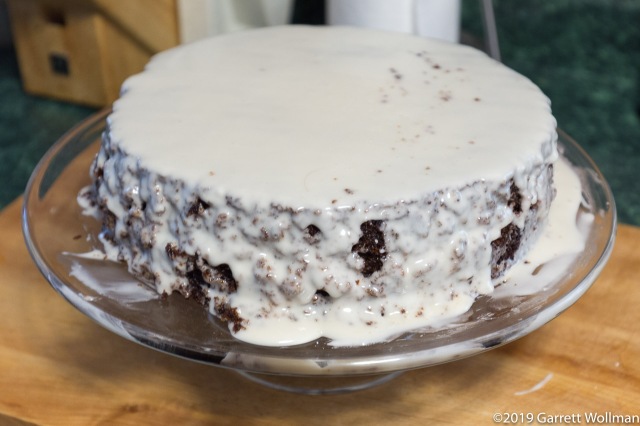 I probably thinned the icing a bit too much; the photo in the cookbook shows a somewhat thicker icing that doesn’t completely cover the sides of the cake. It was good enough, though. The cake had a good, strong ginger flavor, with only a few people noticing the tangy lemon flavor in the icing. Recommended, would make again.

This entry was posted in Food and tagged baking, cake, Claire Ptak, gingerbread, recipe. Bookmark the permalink.
%d bloggers like this: